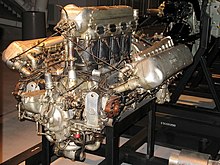 Piston engines are usually arranged so that the cylinders are in lines parallel to the crankshaft. Where they are in a single line, this is referred to as a straight engine (or 'inline engine').

Where the cylinders are arranged in two or more lines (such as in V engines or flat engines), each line of cylinders is referred to as a cylinder bank. The angle between cylinder banks is called the 'bank angle'. Engines with multiple banks are shorter than straight engines and can be designed to cancel out the unbalanced forces from each bank, in order to reduce the vibration.

There are exceptions to this: straight-eight engines were found on some luxury cars from 1919-1954;[1][2][3] a few V4 engines have also been produced, such as marine outboard motors with a vertical crankshaft; and two-cylinder engines (now rarely used for cars) are commonly used for motorcycles in either straight-twin, V-twin or flat-twin layouts.

The most common layout for engines with five or fewer cylinders is for a single bank of cylinders, called a straight (or 'inline') layout.[4] Historically, six-cylinder engines used a straight layout, however a V layout (with two banks of three cylinders each) is now more common for six-cylinder engines in smaller cars as it is more compact externally.[5][6] If overall length is not a limitation, such as for trucks or generator sets, then the I6 remains common. Layouts with two banks (usually in a V layout) are used for most engines with 8 cylinders or more, in order to minimise the length of the engine.[7]

The main advantages of multi-bank engines are their shorter length and, in some cases, the ability to have less vibration due to better engine balance.[8][9] This balance is achieved when forces from one bank are cancelled out by the force from a cylinder in another bank. It is dependent on the layout of the crankshaft more than the cylinder banks alone: the planes on which the pistons are arranged, thus their timing and vibration, depend on both the cylinder bank and the crankshaft angles.

The shorter length makes it easier to package engines with an increased number of cylinders into the limited space available in an engine bay. It also results in a torsionally stiffer construction for both the crankshaft and crankcase. 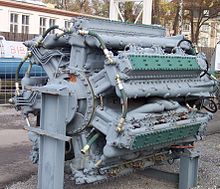 In a radial engine, cylinders are arranged radially in a circle. Simple radials use one row (i.e. one circle) of cylinders. Larger radials use two rows, or even four. However, the cylinders in a multi-row radial engine are laid out quite differently to a typical multi-bank engine; most radials also have odd numbers of cylinders in each row and stagger these between successive rows. This is done to improve airflow over the cylinders of these air-cooled engines.

A few rare radial engines, such as the 1935-1941 Armstrong Siddeley Deerhound[10] and the 1970s Zvezda M503 have arranged their multiple rows so as to align their cylinders into banks.