This article is about the engine manufacturer. For other uses, see Deutz. 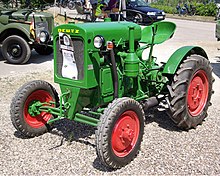 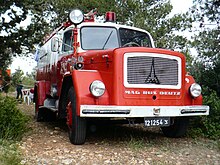 The company was founded by Nicolaus Otto on 31 March 1864, as N. A. Otto & Cie. Otto was the inventor of the four-stroke internal combustion engine. In the early years, he and his partner, Eugen Langen, were only interested in production of stationary engines, not automobiles.[2] The technical director, Gottlieb Daimler, was eager to produce automobiles. In the middle of the 1870s, it was suggested that he transfer to the company's St. Petersburg factory to reduce his influence. He resigned, taking Wilhelm Maybach with him.[2] Deutz also produced agricultural machines such as combine harvesters and tractors, as well as commercial vehicles such as trucks and buses.

During World War II, the company was ordered to produce artillery and operated under the name Klöckner Humboldt Deutz AG (KHD).[citation needed] The factory was almost destroyed by an air raid on the night of the 3rd and 4th of July 1943 (→ Bombing of Cologne in WW II).[3]

Commercial vehicles powered by Deutz engines were popular from 1960 to 1980, sold under the brand name Magirus Deutz.

Deutz's head office is in the Porz district of Cologne and, as of 2004, was manufacturing liquid and air-cooled diesel engines. The larger engines in the Deutz range were manufactured in Mannheim, at a production facility that once belonged to Süddeutsche Bremsen-AG as MWM-Diesel. Deutz also has production facilities in other countries, including Spain, and a joint venture production facility in China. After Deutz took over, the plant specialised in marine engines. This facility now produces engines for marine and power generation which can run on either fuel oils or fuel gases (including landfill gas). In 1995 Deutz sold its agricultural machinery division – Deutz-Fahr – to the Italian company SAME, forming SAME Deutz-Fahr.

Deutz engines are available in the power range 4 to 500 kW, with air, oil or water cooling and with life expectancy of 20,000 and 30,000 running hours TBO (Time Between Overhauling) on rebuilt and brand-new units.

Parts and service are available worldwide. In the United States and Canada, a network of distributors was established a few years ago, providing parts and service in North America.

Deutz-powered air-cooled machines are well-suited for many applications since they cannot freeze or boil-over during normal operation.

Deutz also manufactures oil-cooled engines. These can provide the same power as other engine designs, but in a smaller package, since they don't require the additional space to house a radiator.[citation needed] Deutz also makes engines with a tandem oil cooler/radiator configuration; these also do not require antifreeze or coolant agents.

In 2007, the "Deutz Power Systems" division was sold to 3i, and Deutz AG now concentrates on producing and selling compact engines under the Deutz brand only. They are focusing on manufacturing engines only for the customer, without competing for the entire piece of finished machinery.

On October 1, 2008, the former Deutz Power Systems division received a new, old, name MWM (Motoren Werke Mannheim AG). The company traces its roots to Karl Benz, who set up the foundations of the company in 1871. After splitting the engine business off from Benz AG, it became Motoren-Werke Mannheim AG. Klöckner-Humboldt-Deutz AG took over in 1985, later becoming Deutz AG. After spinning off Deutz Power Systems, the company has made a full circle back to MWM.[4]

In 2012, SAME Deutz-Fahr sold a majority of its holding in Deutz AG to Volvo, selling more than 22 Million shares. This puts Volvo's ownership at just over 25%, and makes them the largest share-holder. SAME Deutz-Fahr retained 8.4% equity in the company.[5]

In 2017, Deutz acquired Torqeedo[6] GmbH, specialist for integrated electric and hybrid drives for boats. In the same year, Volvo has sold all its ownership stakes in Deutz.[7]