Part of an internal combustion engine 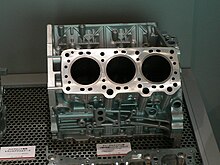 Block of a modern V6 diesel engine. The large holes are the cylinders, the small round orifices are mounting holes and the small oval orifices are coolant or oil ducts.

The term "cylinder block" is often used interchangeably with engine block, although technically the block of a modern engine (i.e. multiple cylinders in a single component) would be classified as a monobloc. Another common term for an engine block is simply "block". 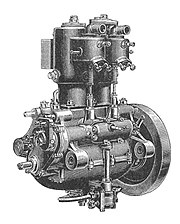 De Dion-Bouton engine, circa 1950. The cylinder heads are integrated into the engine block, however the crankcase is separate. The bottom half of the crankcase also includes the oil sump.[1]

The main structure of an engine (i.e. the long block, excluding any moving parts) typically consists of the cylinders, coolant passages, oil galleries, crankcase and cylinder head(s). The first production engines of the 1880s to 1920s usually used separate components for each of these elements, which were bolted together during engine assembly. Modern engines, however, often combine many of these elements into a single component, in order to reduce production costs.

The evolution from separate components to an engine block integrating several elements (a monobloc engine) has been a gradual progression throughout the history of internal combustion engines. The integration of elements has relied on the development of foundry and machining techniques. For example, a practical low-cost V8 engine was not feasible until Ford developed the techniques used to build the Ford flathead V8 engine. These techniques were then applied to other engines and manufacturers.

Cylinder blocks for a straight-6 engine

Cylinders cast in three pairs (on a marine engine) 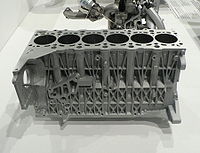 Cylinders cast in a single block of six, with integrated crankcase (turbocharger in background)

In early engines with multiple cylinder banks — such as a V6, V8 or flat-6 engine — each bank was typically a separate cylinder block (or multiple blocks per bank). Since the 1930s, mass production methods have developed to allow both banks of cylinders to be integrated into the same cylinder block.

Wet liner cylinder blocks use cylinder walls that are entirely removable, which fit into the block by means of special gaskets. They are referred to as "wet liners" because their outer sides come in direct contact with the engine's coolant. In other words, the liner is the entire wall, rather than being merely a sleeve.

Advantages of wet liners are a lower mass, reduced space requirement and that the coolant liquid is heated quicker from a cold start, which reduces start-up fuel consumption and provides heating for the car cabin sooner.

For either wet or dry liner designs, the liners (or sleeves) can be replaced, potentially allowing overhaul or rebuild without replacement of the block itself, although this is often not a practical repair option. 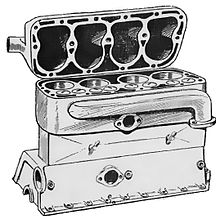 An engine where all the cylinders share a common block is called a monobloc engine. Most modern engines (including cars, trucks, buses and tractors) use a monoblock design of some type, therefore few modern engines have a separate block for each cylinder. This has led to the term "engine block" usually implying a monobloc design and the term monobloc itself is rarely used.

In the early years of the internal combustion engine, casting technology could produce either large castings, or castings with complex internal cores to allow for water jackets, but not both simultaneously. Most early engines, particularly those with more than four cylinders, had their cylinders cast as pairs or triplets of cylinders, then bolted to a single crankcase.

As casting techniques improved, an entire cylinder block of 4, 6, or 8 cylinders could be produced in one piece. This monobloc construction was simpler and more cost effective to produce. For engines with an inline configuration, this meant that all the cylinders, plus the crankcase, could be produced in a single component. One of the early engines produced using this method is the 4-cylinder engine in the Ford Model T, introduced in 1908. The method spread to straight-six engines and was commonly used by the mid-1920s.

Up until the 1930s, most V engines retained a separate block casting for each cylinder bank, with both bolted onto a common crankcase (itself a separate casting). For economy, some engines were designed to use identical castings for each bank, left and right.[2](p120) A rare exception is the Lancia 22½° narrow-angle V12 of 1919, which used a single block casting combining both banks.[2](pp50-53) The Ford flathead V-8 — introduced in 1932 — represented a significant development in the production of affordable V engines. It was the first V8 engine with a single engine block casting, putting a V8 into an affordable car for the first time.[3]

The communal water jacket of monobloc designs permitted closer spacing between cylinders. The monobloc design also improved the mechanical stiffness of the engine against bending and the increasingly important torsional twist, as cylinder numbers, engine lengths, and power ratings increased.

Most engine blocks today, except some unusual V or radial engines and large marine engines, are a monobloc for all the cylinders, plus an integrated crankcase. In such cases, the skirts of the cylinder banks form a crankcase area of sorts, which is still often called a crankcase despite no longer being a discrete part.

Use of steel cylinder liners and bearing shells minimizes the effect of the relative softness of aluminium. Some engine designs use plasma transferred wire arc thermal spraying instead cylinder sleeves, to reduce weight. They can also be produced in compacted graphite iron (CGI) such as some diesel engines.[4]

Some modern consumer-grade small engines use a monobloc design where the cylinder head, block, and half the crankcase share the same casting. One reason for this, apart from cost, is to produce an overall lower engine height. The disadvantage can be that repairs become more time-consuming and perhaps impractical.

An example of engines with integrated cylinder heads are the Honda GC-series and GXV-series engines, which are sometimes called "Uniblock" by Honda.[5]

Several cars with transverse engines have used an engine block consisting of an integrated transmission and crankcase. Cars that have used this arrangement include the 1966-1973 Lamborghini Miura[6] and several cars using the BMC A-series and E-series engines.[7][8] This design often results in the engine and transmission sharing the same oil.

Many farm tractor designs have cylinder block, crankcase, transmission and rear axle integrated into a single unit. An early example is the Fordson tractor.

Engine blocks are normally cast from either a cast iron or an aluminium alloy. The aluminium block is much lighter in weight, and has better heat transfer to the coolant, but iron blocks retain some advantages and continue to be used by some manufacturers.