The firing order of an internal combustion engine is the sequence of ignition for the cylinders.

The numbering system for cylinders is generally based on the cylinder numbers increasing from the front to the rear of an engine.[1] However, there are differences between manufacturers in how this is applied; some commonly used systems are as listed below. 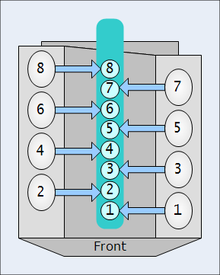 The front cylinder is usually #1, however there are two common approaches regarding the two banks of cylinders:

The selection of whether the #1 cylinder is on the left bank or right bank usually depends on which bank is closer to the front of the crankshaft. However, the Ford Flathead V8 and Pontiac V8 engine actually have the #1 cylinder behind the cylinder from the opposite bank. This was done so that all Ford engines would have cylinder #1 on the right bank and all Pontiac engines would have cylinder #1 on the left bank, to simplify the process of identifying the cylinders.

The cylinders are numbered around the circle,[clarification needed] with the #1 cylinder at the top.

The simplest situation is a longitudinal engine located at the front of the car, which means the engine's orientation is the same as the car's. This illustrates that the rear of the engine is the end that connects to the transmission, while the front end often has the drive belt for accessories (such as the alternator and water pump). The left bank of the engine is on the left side of the car (when looking from behind the car), and vice-versa for the right bank of the engine.

For cars where the engine is installed 'backwards' (i.e. the transmission is closer to the front of the car than the engine), cylinder #1 is located towards the rear of the car. This is the case for the Citroën Traction Avant and many rear-engine cars.

Contrary to most car engines, a ship's engines are often numbered starting from the end of the engine with the power output. Large diesel truck and locomotive engines, particularly of European manufacture, may also be numbered this way.

Cylinders on V engines often include a letter representing the cylinder bank. For example, a V6 engine could have cylinders A1-A2-A3-B1-B2-B3, with cylinders A1 and B1 located at the power output end of the engine. 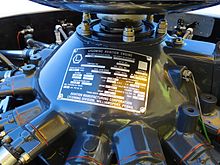 In a radial engine, there are always an odd number of cylinders in each bank, as this allows for a constant alternate cylinder firing order: for example, with a single bank of 7 cylinders, the order would be 1-3-5-7-2-4-6. Moreover, unless there is an odd number of cylinders, the ring cam around the nose of the engine would be unable to provide the inlet valve open - exhaust valve open sequence required by the four-stroke cycle.