A flat-six engine, also known as a horizontally opposed-six, is a six-cylinder piston engine with three cylinders on each side of a central crankshaft. The most common type of flat-six engine is the boxer-six engine, where each pair of opposed cylinders moves inwards and outwards at the same time.

The advantages of the flat-six layout are good engine balance (for reduced vibration), a low center of gravity, short length (compared with an inline-six engine) and being well suited to air-cooling. The disadvantages are a large width (which can limit the maximum steering angle when used in a front-engined car), a large intake manifold being required when a central carburetor is used, and duplication of the inlet and outlet connections for water-cooled engines.[1]

A boxer-style flat-six engine is able to have perfect primary and secondary balance. As per other six-cylinder engines, the overlapping power strokes of the cylinders (with a firing interval of 120 degrees in a four-stroke engine) reduces the pulsating power delivery seen on engines with fewer cylinders. Also, when used in a boxer configuration, a flat-six engine does not have the rocking couple that is present on flat-four engines.[2]

These characteristics result in low vibration for flat-six engines (as per straight-six engines), especially when compared with the imbalances that are present in V6 engines with a 90-degree bank angle.

Early flat-six engines include the Franklin O-265 which began production in 1940, and the Lycoming O-435 which began production in 1942. Several manufacturers use the letter "O" in the model code for flat-six engines, as an abbreviation for the opposed cylinder layout. The Franklin O-335 was used in the Bell 47 light helicopter.

Some aircraft have used flat-six engines originally designed for cars. The Porsche PFM 3200 engine, produced from 1985-1991, was based on the engine used in the Porsche 911 sports car. Several examples of the Pietenpol Air Camper homebuilt monoplane aircraft have used the air-cooled engine from the Chevrolet Corvair compact car.[3] Compared with the engines used in cars, flat-six engines used by helicopters have large displacements and are low revving, producing more torque and less power.[4]

The flat-six engine is often associated with the Porsche 911, a rear-engined sports car which has used flat-six engines exclusively since 1963. The engines were air-cooled until the 1999, when Porsche started using water-cooled engines.[5] 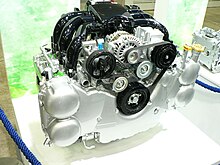 The first car to use a flat-six engine was the 1904–1907 Wilson-Pilcher 18/24 HP,[6] which used an engine based on a flat-four engine with two cylinders added. The Wilson-Pilcher was a front-engined car with the crankshaft in-line with the chassis and the cylinders between the chassis rails. Reports on this car quote it as being "remarkably silent and smooth running" and "almost total absence of vibration".[7] 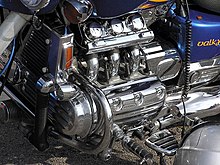