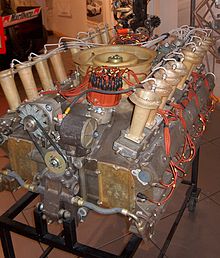 A flat-sixteen engine, also known as a horizontally opposed-sixteen, is a sixteen-cylinder piston engine with eight cylinders on each side of a central crankshaft.

Flat-sixteen engines are less common than V16 engines, with only a couple of prototype racing engines using a flat-sixteen layout.

These engines had two connecting rods per crankpin, so they could also be referred to as a 180 degree V16, rather than a boxer configuration as used by most flat engines with six cylinders or less.[1][2]

The Coventry Climax FWMW was a prototype flat-sixteen engine designed between 1963 and 1965 that was intended for use in Formula One.[3] The Brabham and Lotus teams designed cars for this engine but it was never raced. This was due to reliability problems in testing and a failure to generate the desired power output.[4][5][3][6]

In 1971, Porsche developed a flat-sixteen prototype engine to use in the Porsche 917 that competed in the Can-Am championship.[7] The project was abandoned and the 1972 Porsche 917/10K was instead powered by a turbocharged version of Porsche's existing flat-twelve engine.[8]