For other uses, see Tank (disambiguation).

A fuel tank (or petrol tank) is a safe container for flammable fluids. Though any storage tank for fuel may be so called, the term is typically applied to part of an engine system in which the fuel is stored and propelled (fuel pump) or released (pressurized gas) into an engine. Fuel tanks range in size and complexity from the small plastic tank of a butane lighter to the multi-chambered cryogenic Space Shuttle external tank. 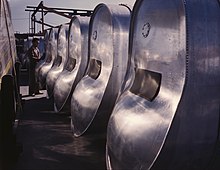 The fuel tanks for B-25 bombers

Typically, a fuel tank must allow or provide the following:

Plastic (high-density polyethylene HDPE) as a fuel tank material of construction, while functionally viable in the short term, has a long term potential to become saturated as fuels such as diesel and gasoline permeate the HDPE material.

Considering the inertia and kinetic energy of fuel in a plastic tank being transported by a vehicle, environmental stress cracking is a definite potential. The flammability of fuel makes stress cracking a possible cause of catastrophic failure. Emergencies aside, HDPE plastic is suitable for short term storage of diesel and gasoline. In the U.S., Underwriters Laboratories approved (UL 142) tanks would be a minimum design consideration. 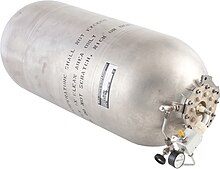 While most tanks are manufactured, some fuel tanks are still fabricated by metal craftsmen or hand-made in the case of bladder-style tanks. These include custom and restoration tanks for automotive, aircraft, motorcycles, boats and even tractors. Construction of fuel tanks follows a series of specific steps. The craftsman generally creates a mockup to determine the accurate size and shape of the tank, usually out of foam board. Next, design issues that affect the structure of the tank are addressed - such as where the outlet, drain, fluid level indicator, seams, and baffles go. Then the craftsmen must determine the thickness, temper and alloy of the sheet he will use to make the tank. After the sheet is cut to the shapes needed, various pieces are bent to create the basic shell and/or ends and baffles for the tank. Many fuel tanks' baffles (particularly in aircraft and racecars) contain lightening holes. These flanged holes serve two purposes, they reduce the weight of the tank while adding strength to the baffles. Toward the end of construction, openings are added for the filler neck, fuel pickup, drain, and fuel-level sending unit. Sometimes these holes are created on the flat shell, other times they are added at the end of the fabrication process. Baffles and ends can be riveted into place. The heads of the rivets are frequently brazed or soldered to prevent tank leaks. Ends can then be hemmed in and soldered, or flanged and brazed (and/or sealed with an epoxy-type sealant) or the ends can be flanged and then welded. Once the soldering, brazing or welding is complete, the fuel tank is leak-tested.[1]

In the aerospace industry, the use of Fuel Tank Sealants is a common application for high temperature integral fuel tanks. This provides excellent resistance to fluids such as water, alcohols, synthetic oils and petroleum-based hydraulic fluids.[2]

The maximum distance a combustion-engine powered car with a full tank can cover is the product of the tank capacity and its fuel efficiency (as in miles per gallon). While larger tanks increase the maximum distance, they also take up more space and (especially when full) add to the total weight, requiring higher fuel consumption for the same performance. Fuel-tank capacity is therefore the result of a trade-off in design considerations. For most compact cars, the capacity is in the range 45–65 litres (12–17 US gal); the original model Tata Nano is exceptional with its 15 litres (4 US gal) fuel tank. SUVs and trucks tend to have considerably larger fuel tanks.

For each new vehicle a specific fuel system is developed, to optimize the use of available space. Moreover, for one car model, different fuel system architectures are developed, depending on the type of the car, the type of fuel (gasoline or diesel), nozzle models, and region.

Two technologies are used to make fuel tanks for automobiles:

Modern cars often feature remote opening of the fuel tank fuel filler flap using an electric motor or cable release. For both convenience and security, many modern fuel tanks cannot be opened by hand or otherwise from the outside of the car.

Sometimes called the reserve tank is a secondary fuel tank (in many cars/bikes it contains around 15% of the capacity of the primary tank) these are more commonly found on bikes, older cars (some without a fuel gauge) and vehicles designed for long distance or special use. A light on the instrument panel indicates when the fuel level dips below a certain point in the tank. There is no current standard, although some efforts are made to collect this data for all automobiles.

In vehicles modified for endurance the primary tank (the one that comes with the car) is made into a reserve tank and a larger one installed. Some 4x4 vehicles can be fitted with a secondary (or sub-tank) by the dealership.

Ship in a bottle

The ship in a bottle fuel tank is a manufacturing design developed by TI Automotive in Rastatt, Germany wherein all fuel delivery components including the pump, control electronics and most hosing are encased within a blow-molded plastic fuel tank,[3] and named after the traditional ship-in-a-bottle mechanical puzzle. The technique was developed to reduce fuel vapor emissions in response to Partial Zero-Emission Vehicle (PZEV) requirements.[4] The first application was for the 2005 Ford GT.

A racing fuel cell has a rigid outer shell and flexible inner lining to minimize the potential for punctures in the event of a collision or other mishap resulting in serious damage to the vehicle. It is filled with an open-cell foam core to prevent explosion of vapor in the empty portion of the tank and to minimize sloshing of fuel during competition that may unbalance the vehicle or cause inadequate fuel delivery to the motor (fuel starvation).[5]

For safety considerations, in modern cars the fuel tank is usually located ahead of the rear axle, out of the crumple zones of the car.

Automobiles such as the Ford Pinto or the models that still use the Ford Panther platform (Ford Crown Victoria, Lincoln Town Car, and Mercury Grand Marquis) are notorious for having the fuel tank behind the rear axle. Since 1980 new Ford models corrected this problem and had the fuel tank in front of the rear axle.[6]

General Motors 1973-1987 C/K pickup trucks have the fuel tank located outside the frame. According to the Center for Auto Safety this creates a fire hazard.[7] In automotive applications, improper placement of the fuel tank has led to increased probability of fire in collisions. Circa 1990, General Motors faced over a hundred product liability lawsuits related to fires allegedly caused by GM's decision to place the fuel tanks in its pickup trucks outside the protection of the vehicle's frame.[8] In 1993, reportage on this matter for NBC News created a scandal over vehicles rigged to catch fire for the television camera.

Ford's Pinto also sparked controversy for putting the fuel tank in a poorly reinforced area which can cause deadly fires and explosions if the car got into a rear-end collision, costing Ford US$125 million.

Likewise for safety reasons, the filler could no longer be in the middle back of the car in the crumple zone and thus had to be on the side of the car. Which side is a series of trade-offs: driver's side is easier to access, and mechanically simpler for gas cap locks; passenger side is safer (away from passing traffic in roadside fill-ups). Asymmetric sliding doors may also dictate placement and some minivan doors will collide with a fillup in progress.[9] 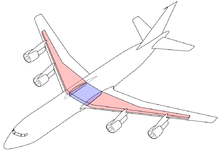 Fuel tanks have been implicated in aviation disasters, being the cause of the accident or worsening it (fuel tank explosion).[11][failed verification] For example:

In some areas, an aircraft's fuel tank is also referred to as an aircraft fuel cell.

Water supply systems can have primary or backup power supplied by diesel-fueled generators fed by a small "day tank" and a much larger bulk storage fuel tank.[14][15]

Proper design and construction of a fuel tank play a major role in the safety of the system of which the tank is a part. In most cases intact fuel tanks are very safe, as the tank is full of fuel vapour/air mixture that is well above the flammability limits, and thus cannot burn even if an ignition source were present (which is rare).

Several systems, such as and rubber bladders, have been developed and deployed for use in protecting (from explosion caused by enemy fire) the fuel tanks of military vehicles in conflict zones.[16]