The GM High Feature engine (also known as the HFV6, and including the 3600 LY7 and derivative LP1) is a family of modern General Motors DOHC V6 engines. The series was introduced in 2004 with the Cadillac CTS and the Holden Commodore (VZ).

It is a 60° 24-valve design with aluminum block and heads and Sequential multi-port fuel injection. Most versions feature continuously variable cam phasing on both intake and exhaust valves and electronic throttle control. Other features include piston oil-jet capability, forged and fillet rolled crankshaft, sinter forged connecting rods, a variable-length intake manifold, twin knock control sensors and coil-on-plug ignition. It was developed by the same international team responsible for the Ecotec, including the Opel engineers responsible for the 54° V6, with involvement with design and development engineering from Ricardo plc.

Holden sells the HFV6 under the name Alloytec. The High Feature moniker on the Holden produced engine is reserved for the twin cam phasing high output version. The block was designed to be expandable from 2.8 L to 4.0 L. High Feature V6 engines were previously produced in Fishermans Bend, Port Melbourne, Australia and remain in production at the following four manufacturing locations: St. Catharines, Canada; Flint Engine South in Flint, Michigan, United States; Romulus Engine Plant in Romulus, MI and Ramos Arizpe, Coahuila, Mexico. The assembly lines for the St. Catharines and Flint facilities were manufactured by Hirata Corporation at their powertrain facility in Kumamoto, Japan. Most of the designs of this motor happened in Flint. They were first produced for the Cadillac range.

The HFV6 was first designed, tested and produced in a joint program by Cadillac and Holden. A majority of designs into the new alloy construction, transmission pairing and first use in production were all undertaken in Detroit (and manufactured in St. Catharines, Ontario). Holden had the job of developing smaller engines (Holden 3.2, LP1 and Saab 2.8, LP9 Turbo) as well as their own Holden 3.6 HFV6 (called the Alloytec V6) for local models.

Cadillac and Holden both tested variations of these engines in US and Australia. 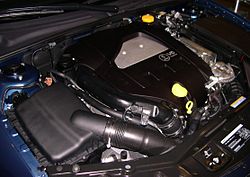 The LP9 is a 2.8 L turbocharged version used for the Saab 9-3, Saab 9-5 and other GM vehicles. It has the same bore and stroke as the naturally aspirated LP1, however the compression ratio is reduced to 9.5:1. The engine is manufactured at Holden's Fishermans Bend engine factory in Port Melbourne, Australia, while GM Powertrain Sweden (formerly Saab Automobile Powertrain) is responsible for turbocharging the engine. Global versions of this engine use the same horsepower rating for both metric and imperial markets – mechanical horsepower – while the Europe-only versions are rated in metric horsepower.

The LAU is GM's new code for the LP9 Turbo engine, its usage starting with the 2010 Cadillac SRX.[1] In 2011, production of the Cadillac SRX with the LAU engine ceased, but the engine remained in use in the Saab 9-4X until 2012, when production of that model came to an end.[2][3]

The LFW is a flexible fuel version of the LF1, capable of running on E85, gasoline, or any mixture of the two. Output is identical to the LF1.

For Alfa Romeo version of the 3.2 L, see JTS engine.

The LFX is an enhanced version of the LLT engine. Introduced in the MY2012 Chevrolet Camaro LS, it is 20.5 pounds (9.3 kg) lighter than the LLT, due to a redesigned cylinder head and integrated exhaust manifold, and composite intake manifold. Other components like the fuel injectors, intake valves, and fuel pump have also been updated. Power and torque are up slightly from the LLT. The compression ratio is 11.5:1. The LFX also features E85 flex-fuel capability.

In essence, the twin-turbo 3.6L V6 is the forced-induction variant of the popular LFX V6 found in the Cadillac ATS, XTS, and SRX, among many other GM models, with several important upgrades, including:

The LF4 is a higher-performance variant of the LF3 for use in the Cadillac ATS-V. Changes to the LF3 include:

The LFR is a bi-fuel variant of the LFX, although multi-point fuel injection is used for both the gasoline and CNG instead of direct-injection.

The LFY is similar to the LFX, but adds stop-start technology and has improved airflow.[18]

Starting with 2016 Cadillac models a new generation of High Feature V6s were developed.[19] These new engines have redesigned block architectures with bore centers increased from 103 mm (4.055 in) on prior HFV6 engines to 106 mm (4.173 in) and a redesigned cooling system to target the hottest areas while also facilitating faster warm-up. They also incorporate engine start-stop technology, cylinder-deactivation, 2-stage oil pumps, and updated variable valve timing featuring intermediate park technology for late-intake valve closure. Both engines debuted in the 2016 Cadillac CT6.[20]

The LGZ is a variant of the LGX designed for pickup truck use.[22][23]

On March 21, 2007 AutoWeek reported that GM was planning to develop a 60-degree V12 based on this engine family to power the top version of Cadillac's upcoming flagship sedan. This Cadillac would essentially have had two 3.6 L High Feature V6s attached crankshaft-to-crankshaft and would have featured high-end technologies including direct injection and cylinder deactivation. If this engine would have been developed, it would have displaced 7.2 liters, and produced approximately 600 hp (447 kW; 608 PS) and 540 lb⋅ft (732 N⋅m) of torque. Development of the engine was reportedly being conducted in Australia by Holden.[24]