The Gnome 7 Omega (commonly called the Gnome 50 hp) is a French seven-cylinder, air-cooled aero engine produced by Gnome et Rhône.[2] It was shown at the Paris Aero Salon held in December 1908 and was first flown in 1909. It was the world's first[1] aviation rotary engine produced in quantity. Its introduction revolutionized the aviation industry[3] and it was used by many early aircraft. It produced 37 kW (50 hp) from its 8 L (490 cu in) engine capacity.[4] A Gnome Omega engine powers the 1912 Blackburn Monoplane, owned and operated by the Shuttleworth Collection, the oldest known airworthy British-designed aeroplane worldwide.[5] A two-row version of the same engine was also produced, known as the Gnome 14 Omega-Omega or Gnome 100 hp. The prototype Omega engine still exists, and is on display at the United States' National Air and Space Museum.[2]

sectional views of the Gnome Omega 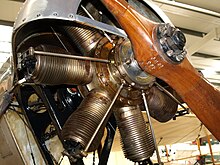