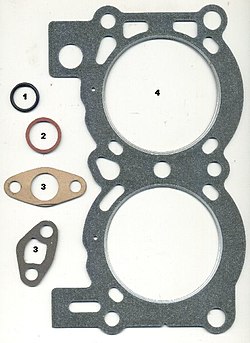 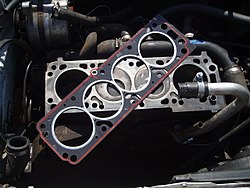 A replacement head gasket sitting loosely on top of a four-cylinder 1989 Vauxhall Astra engine block. Once positioned correctly the cylinder head will be bolted down on top of it, using a torque wrench.

A head gasket is a gasket that sits between the engine block and cylinder head(s) in an internal combustion engine.

Its purpose is to seal the cylinders to ensure maximum compression and avoid leakage of coolant or engine oil into the cylinders; as such, it is the most critical sealing application in any engine, and, as part of the combustion chamber, it shares the same strength requirements as other combustion chamber components.[1]

Within a water-cooled internal combustion engine, there are three fluids which travel between the engine block and the cylinder head:

Correct operation of the engine requires that each of these circuits do not leak or lose pressure at the junction of the engine block and the cylinder head. The head gasket is the seal that prevents these leaks and pressure losses.

Occasionally, the compression in the cylinder will cause a leak to form in the gasket thus needing replacement, otherwise severe damage can take place and eventually become a "blown" head gasket. This problem has been exacerbated by the use of aluminum rather than iron cylinder heads; while lighter than iron, aluminum has a much greater thermal expansion rate, which in turn causes a great deal more stress to be placed on the head gasket. Engine manufacturers have responded to this problem by adding a non-stick coating such as Teflon to the surface of the head gasket.

If the gasket fails, then the engine is either facing compression loss issues, leakage issues or a combination of both:

A damaged head gasket can allow gases to leak between cylinders.

Compression loss from a damaged head gasket can lead to power reduction, or a rough engine. This is because exhaust and intake gases are either leaking out of the cylinder or being forced into the cooling system, which leads to the engine overheating and can also lead to increased engine wear due to the motor oil being mixed with antifreeze.

In other occurrences the gases can leak into small spaces between the gasket and either the cylinder head or engine block traps those gases, and then released when the engine is turned off. These gases then escape into the coolant and create air pockets. Sometimes these air pockets can get trapped in the engine's coolant thermostat, causing it to stay closed and cause further overheating, thereby creating more voids between the gasket and the engine. Other times these air pockets can also cause the engine to expel coolant into the overflow or expansion tank, thereby reducing the amount of coolant, the engine has available, to stay cool.

A damage head gasket can cause coolant to leak into the cylinders thus tampering with the combustion cycle and causes the exhaust to blow out steam,[4] damaging the catalytic converter. If a very large amount of coolant leaks into the cylinders, then the engine can suffer from hydrolock, which can cause extensive engine damage. Sometimes, all that may happen when a head gasket is blown is excessive steam erupting from the tailpipe, yet the engine may act and drive like normal (keep in mind that the steam is still damaging the catalytic converter), until all the coolant is gone and the engine starts to overheat.

The condition of a head gasket is typically investigated by checking the compression pressure with a pressure gauge, or better, a leak-down test, and/or noting any indication of combustion gases in the cooling system on a water-cooled engine. Oil mixed with coolant and excessive coolant loss with no apparent cause, or presence of carbon monoxide or hydrocarbon gases in the expansion tank of the cooling system can also be signs of head gasket problems.[5]

A good sign of head gasket failure on water-cooled engines is the presence of a substance that resembles mayonnaise in the oil, often to be seen on the dipstick, or oil filler cap. However, the presence of this substance is not conclusive proof of head gasket failure, since oil could mix with the coolant via other routes. Likewise, it is entirely possible for a head gasket to fail in such a way that oil never comes in contact with coolant. Because of this, oil that has NOT become contaminated with coolant should not be taken as a definitive sign that the head gasket is okay.

A leaking head gasket can be classified as either external or internal. An external leak can be identified as oil and coolant accumulating underneath the engine. The presence of coolant can be detected by shining a black light on what appears to be an oil leak; the appearance of coolant will show up under the black light. External leaks can also appear as previously described in the oil. An internal leak can usually be diagnosed by excessive coolant accumulating in the expansion tank along with the presence of hydrocarbons in the form of foam. The possibility of vapors or condensation and/or water (from the road or rain) building up (in aftermarket product installation) from an external breather or catch tank from the head (rocker cover) can also cause a buildup of froth or foam in the oil but is highly unlikely.

The cost of a replacement gasket is usually not extreme, but the price of total repair is significantly high.[6] This is because the process of removing/replacing an engine head is very time-consuming—around 75% of cost will be labor. Furthermore, untreated blown gaskets usually seriously damage the engine, then requiring even more expensive work.

Engine knocking (detonation) can be caused by poor quality fuel, an engine fault or if inappropriate fuel and/or ignition settings are trialled chosen while engine tuning is taking place. If the detonation is severe, the cylinder pressure can be increase to 8 times above normal pressures,[citation needed] which can cause the cylinder head to lift away from the engine block, disrupting the seal between the two. Most gaskets used in standard production engines can be critically damaged by severe detonation.