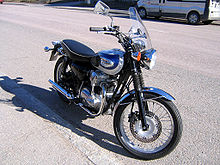 The right side of the motorcycle reveals the Ducati Desmo style cover for the bevel drive system that operates the camshaft.The color scheme is called "Galaxy Silver/Luminous Boralis Blue" (2000).

The Kawasaki W650 is a retro standard motorcycle marketed by Kawasaki for model years 1999-2007 and superseded by the Kawasaki W800.

In 1999, superseding the Zephyr series, Kawasaki introduced the W650, resembling British motorcycles of the early 1960s, notably the Triumph Bonneville.[1] In contrast to British twin-cylinder motorcycles of the period, which featured pushrod engines, the W650 features a shaft-driven bevel-gear overhead camshaft, similar to those found on 1970s Ducati singles and V-twins.[2]

The W650 has a long-stroke engine of 72 mm bore x 80 mm stroke with an anti-vibration balance shaft and modern electronics. In 2006 Kawasaki added a short-stroke W400 model, in Japan. Kawasaki simply combined the same 72 mm bore with a short-throw crankshaft to give a 49 mm stroke and 399 cc (24 cu in) displacement.[3]

In the United States and Canada the W650 was imported for model years 2000-2001. With weak US and Canadian sales and the introduction of the competing "retro" Bonneville by Triumph, Kawasaki concentrated sales in Europe and Japan.[1] It was the last full-size motorcycle sold in the United States with a kickstarter. 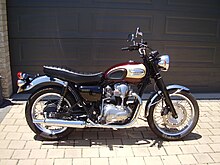