The Koenigsegg Regera is a limited production, plug-in hybrid grand touring sports car manufactured by Swedish automotive manufacturer Koenigsegg. It was unveiled at the March 2015 Geneva Motor Show. The name Regera is a Swedish verb, meaning "to reign" or "to rule." Koenigsegg plans to produce only 80 units of the car, all of which have been sold.[9][10]

The Regera was developed and designed to be a more practical, luxurious, grand touring alternative to the rest of Koenigsegg's lightweight sports car lineup; initially the Agera and currently the Jesko. As a result, it is less focused on track performance and spartan weight reduction and more focused on the smooth and instant delivery of power provided by its overhauled powertrain. Koenigsegg states that the Regera will be one of the most powerful and fastest accelerating hybrid production cars produced.

The introduction of the Regera alongside the Agera RS in 2015 resulted in Koenigsegg, for the first time ever, simultaneously having two models in production.[8] This role was passed from the Agera to the Jesko in 2019, which has since shared the production line with the Regera.

Koenigsegg founder Christian von Koenigsegg purchased a Tesla Model S P85+ in 2013, and was impressed by the car's ability to instantly deliver power without the need for a downshift or to wait for turbo lag.[11] He was especially impressed with the direct and intuitive experience provided by an electric car like the Tesla, remarking that the instantaneous response of the motors was something even a Formula One car could not attain with a traditional internal combustion engine.[12] Von Koenigsegg sought to combine this desirable aspect of electric powertrains with the traditional Koenigsegg experience of a lightweight, powerful sports car.

Realising some form of compromise was necessesary, von Koenigsegg decided to look to a hybrid solution. By removing the traditional 7-speed dual-clutch transmission and switching to a single-gear direct drive system, Koenigsegg mitigated the added weight of the three electric motors and a 4.5 kW·h battery pack installed in the Regera as compared to the previous Agera models.[12] The single-gear electrical solution also provided the instant response that von Koenigsegg sought, while the onboard internal combustion engine would then maintain the rapid acceleration and power at higher speeds where the electric motors are less effective. 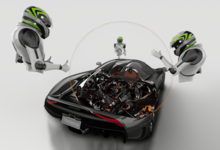 The Regera in NVIDIA Holodeck

The Regera was designed with a combination of the CATIA software suite and Autodesk Inventor, with AutoCAD Electrical being primarily used to redesign the vehicle's electrical systems from past Koenigsegg models.[13] According to Koenigsegg Technical Director Jon Gunner, the Regera makes use of several power nodes to connect wiring throughout the car compared to the single power node of previous models, which saves weight.[13]

Koenigsegg uses 3D printing technologies to manufacture many parts of the Regera. This includes static components like details in the interior of the car under the upholstery and the large electrical exhaust port at the rear of the car, as well as dynamic components like the variable-geometry turbocharger in the engine.[13][14] This manufacturing technique allowed Koenigsegg to better tune air flow through the turbochargers and achieve a more complex inner housing shape which was impossible with conventional methods.

The Regera was used by NVIDIA to introduce Project Holodeck, a virtual reality environment capable of importing and manipulating high-detail 3D models. This technology was used by Koenigsegg engineers to collaborate on design ideas in real time, and could allow customers to experience their custom made vehicle in VR before it is purchased or built.[15]

The Regera is a two-door targa top with a detachable roof that can be stowed in the boot.[16] It is the first hybrid car to be produced by Koenigsegg, as well as the first vehicle to use their Direct Drive System for power delivery. As the company's 'grand touring' oriented offer in their two-car lineup, the Regera focuses more on interior luxury and daily usability instead of hardcore track performance like the Jesko.[17]

Diagram of the Regera's powertrain

Power diagram of the Regera's ICE and hybrid system

Under braking, the kinetic energy recovery system in the Regera can regenerate up to 150 kW of power to recharge the battery during operation.[27]

Christian von Koenigsegg invented the Koenigsegg Direct Drive System (KDD), and it was developed for the Regera by the Koenigsegg Advanced Engineering Team.[28] The KDD system effectively eliminates the need for a transmission and allows for pure EV (electric vehicle) mode. The Regera doesn't have a traditional multi-gear transmission but instead features a single-speed fixed-gear transmission, often called a direct drive, with a 2.73:1 reduction ratio, meaning the crankshaft mounted on the ICE will rotate 2.73 times for every 1 time that the output shaft of the direct drive mechanism will rotate.[29]

The Regera features a similar suspension layout to the preceding Agera models, with double wishbone suspension at the front and rear axles.[33] The wishbones are manufactured from chrome-molybdenum steel tubes, which was chosen over carbon-fibre due to the significant cost and complexity of the latter option.[34] The suspension incorporates special "Z" shaped anti-roll bars that connect to the body at only one point (as opposed to two for traditional "U" shaped bars). Also returning from the Agera models is Koenigsegg's 'Triplex' damper system, which consists of three custom Öhlins shock absorbers on the rear suspension subsystem.[34] While anti-dive forces under heavy braking are achieved by obliquely mounting the top wishbones in the front of the car, this mounting position could not be achieved in the rear. Therefore, the purpose of the third 'Triplex' rear damper is to provide anti-squat forces under hard acceleration.

Like its other production counterparts, the Regera is equipped with active aerodynamics for optimised downforce. At the rear is a foldable hydraulic wing, and at the front are active flaps that can modify the flow of air under the car. The manufacturer claims that the stock aerodynamic system is capable of generating 450 kg (990 lb) of downforce at 250 km/h (155 mph).[8]

Before the 2018 Geneva Motor Show, Koenigsegg revealed the optional 'Ghost' aerodynamics package for the Regera. This package widens the front splitter, adds canards to the front fenders, and adds fixed winglets to the rear quarter panels.[36] Koenigsegg claims that, with the Ghost package installed, the downforce of the Regera is "increased by more than 20 percent".[36]

The Regera includes added insulation to help add to the luxury by reducing cabin noise caused by the wind and powertrain along with 8-way electrically adjustable memory foam seats included as an added luxury item over previous models. The Regera also includes many new technical features such as a Neonode 9-inch infrared information and entertainment system, a complete camera system with recording capabilities (front, inner, and rear), Apple CarPlay, a new sound system, ambient lighting, and 4G and Wi-Fi connectivity.[37] It also features front and rear parking sensors.[8][38]

The wireless connectivity capabilities of the Regera allow for Koenigsegg to send over-the-air firmware and software updates to each car as necessary.[39] This allows for the remote modification of parameters such as the power band of the electric motors or throttle response without the need for physical work on the car.[16]

The Regera has active engine mounts for the ICE and transmission to rest on. The engine mounts are designed to stay soft at lower speeds, significantly reducing vibrations and engine noise, adding to the luxury effect of the vehicle. While driving more aggressively or at higher speeds, the engine mounts will firm up, giving greater lateral response to the driver.[8]

The day-time running lamps on the Regera were designed to resemble a constellation, with the carbon-fibre background resembling the night sky. In addition, the headlamps can actively vent out condensation through two small fans installed in each lamp.[40] Koenigsegg claims that the Regera is the first "fully-robotized" car.[41] All openings and wing mirrors are fitted with proximity sensors to safeguard against the doors striking nearby objects (curb, low roof, etc) while opening or closing.[42] The vehicle features hydraulic pumps and accumulators to control the active front and rear wings, as well as active chassis control and lifting. Hydraulic lifters were added to the already existing pumps and accumulators to allow for all body panels on the vehicle to be remotely operated.[8]

The Regera uses a fishtail-style dual exhaust system designed by Akrapovič constructed of titanium, Inconel, and stainless steel.[43] The large central exhaust pipe under the charging port is not used to vent exhaust from the ICE, rather, it expels hot air from the cooling system for the batteries and electronics in the car.[44]

The Regera has a power-to-weight ratio of 0.7 kW (0.94 hp) per kilogram, and the combined ICE and electric motors produce the highest combined peak power and torque output of any other production hybrid car.[45]

Comparison with other Koenigsegg models

Reviews of the Regera have been generally positive, with most descriptions of the driving experience being centered around the unique feel of the Direct Drive system. Automobile magazine writes that driving the Regera is "a new sensation, perhaps a combination of the feel you get from electric cars like the Model S, which also has no conventional gearbox, and a combustion-engine vehicle with a continuously variable transmission".[57] Top Gear writes that at low speeds, the noise and drive of the Regera feels like "a lazy American V8 muscle car", but that at higher speeds, the car is "instantly alert" and "corners flat and tenaciously".[16] Other minor criticisms of the driving experience include the electric motor activation delay and the "slight CVT feel" upon sudden acceleration. However, it is important to note that each car's transmission feel and power delivery can be tuned to the request of the customer.[16]

The Regera's design has received acclaim from reviewers, with Top Gear remarking "there's real beauty in its long tail and taut curves".[16] Global Car Brands praised the car for differing from the common trend of hyper-aggressive fronts, instead going for a "happy looking face".[58] In particular, reviewers commend the car for its remarkable exterior paint jobs, which are described in separate reviews as being "sensational",[16] "absolutely stunning",[59] and "gloriously wonderful".[60] On the inside, Automobile magazine compliments the "well-designed" and "wildly special" interior of the car, however remarks that it may be topped by the opulence of the Bugatti Chiron, a direct competitor to the Regera.[61]

Koenigsegg plans to build 80 units of the Regera, making it the largest single-vehicle production run from the company until the introduction of the Jesko in 2019, of which the company plans to build 125 units.[62] All build slots sold out on 13 June 2017 to customers and dealerships, just over two years after the initial unveiling of the car in Geneva.[63] The Regera will be built in both left- and right-hand drive configurations for the British and Australian markets.[64]