L. Gardner and Sons Ltd was a British builder of diesel engines for stationary, marine, road and rail applications. The company was founded in Hulme, Manchester, England in 1868. It started building engines around 1895. The firm ceased engine production in the mid-1990s. 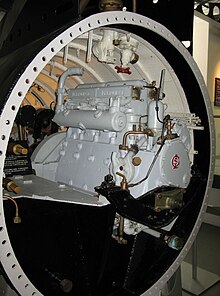 The Gardner engine of X24

About 1868 Lawrence Gardner set up as a sewing machine maker in Upper Duke Street, Stretford Road, Hulme, Manchester. He died in 1890, but the business was continued by his sons under the name L. Gardner & Sons Ltd.

From about 1895 the company was building gas engines and, in 1899 it moved into Barton Hall Engine Works, Patricroft, Manchester. 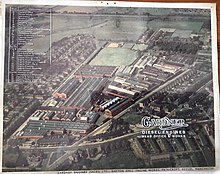 In 1903 it became a limited company, L Gardner and Sons Ltd. Norris and Henty Ltd, of London, were appointed as sales agents.

Diesel engine production began in around 1903. In 1912 a new sales subsidiary, Norris, Henty and Gardners Ltd, was formed.

During World War I (1914–1918) the company made munitions and parts for heavy guns and engines for tanks.

During the 1920s there was rapid development in the design of diesel engines. In 1929 a Gardner "4L2" marine engine was fitted into a Lancia bus. This conversion was successful and prompted Gardner to introduce the "LW" series of diesel engines, designed especially for road vehicles but later modified and supplied as a marine engines with factory-fitted bilge pumps. The LW engine was a modular design, with separate cast iron cylinder blocks and cylinder heads comprising either 2 or 3 cylinders. A 5-cylinder engine would thus use a "2" and a "3", whereas a 6-cylinder engine could have either 3 "2"s or 2 "3"s. Boat engines had a cast iron crankcase, whereas (in the interest of lightness) road vehicles would have an aluminium alloy crankcase. Any boat engine with an alloy crankcase would be a marinised road engine.

During the 1930s a number of LW-series engines (usually 4LWs, but occasionally 6LWs) were installed in large luxury cars including Lagondas, Bentleys and Rolls-Royces. The Gardner engine's reliability and economy (tests showed that even a two-ton Bentley could achieve 30 miles per gallon of fuel while having a top speed of 80 mph), coupled to its remarkable refinement and smooth running abilities, made it the only suitable compression-ignition engine at the time

During World War II (1939–1945) Gardner's war work consisted mainly of building diesel engines of their own design. Their 4LK bus engines were also used as the main powerplant in the Royal Navy's X class and XE class midget submarines.[1]

A Sectioned 6LW of 1961 at the Anson Engine Museum from a Bristol Commercial Vehicles bus.

After the war the 'LW' diesel engine continued to be built in large numbers for lorries and buses and was later supplemented by the more modern 'LX'. In the mid-sixties, the LW range was upgraded to develop 20 bhp per cylinder, and known as LW20. The 6LX was upgraded in 1967 from 150 bhp @1700rpm to 180 bhp @1850rpm. An 8-cylinder version was developed which developed 240 bhp @ 1850rpm, and was said to be the smoothest running automotive diesel ever built. The larger '6L3' and '8L3' engines were used in railway locomotives, such as British Rail Class 01 and 04 and also in vessels of up to 120 feet such as MV Havengore, and maxi yachts Condor and Condor of Bermuda.

In the summer of 1986, after months of denials, Perkins Engines purchased Gardner to complement their line of lighter diesel engines.[6] Production was then shut down until October, as Gardner's truck engine market share had slumped precariously. Gardner's market for buses and coaches was doing better.[7]

L. Gardner and Sons ceased production of new engines in the early 1990s. The introduction of emissions regulations for road-going Gardner diesels would have required the development of significantly modified or totally new engine designs, and in the marine market there was a shift away from big, low-speed, high-torque engines such as Gardners towards adapted high-speed automotive turbodiesels.

Two spin-off firms from the original company are still in existence: Gardner Marine Diesels[8] overhauls, re-manufactures and installs a wide range of marine-spec Gardners and both they and Walsh Engineering [9] supply genuine Gardner engine parts for all types of Gardner engines worldwide.

Another firm, Marine Power Services,[10] specialise in the restoration and marinisation of Gardners for the inland waterways and the manufacture of component castings incl LW range exhaust, intake and water manifolds.

In Ireland, Tangent Engineering are devoted to Gardner, exporting and operating world wide. Their specialism is installing Gardners in gensets, boats and peculiar vehicles: Land Rovers and vintage fire tenders: [11]

And on the other side of the world in Australia, Mainline Diesel Engineering, [12] headed by business principal Kevin Riley, who was fully trained by L. Gardner & Sons in the UK as a diesel fitter, supplies parts and fully restores Gardner engines to the same high specification Gardner was renowned for.

The 6LXC engine (giving 195 bhp) is not mentioned. Source

The Anson Engine Museum has an extensive collection of historic Gardner engines.