The presence of a material to reduce friction between two surfaces. 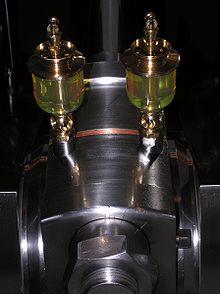 Lubrication of a ship's steam engine crankshaft. The two bottles of lubricant are attached to the piston and move while the engine is operating.

Lubrication is the process or technique of using a lubricant to reduce friction and wear and tear in a contact between two surfaces. The study of lubrication is a discipline in the field of tribology.

Fluid-lubricated systems are designed so that the applied load is partially or completely carried by hydrodynamic or hydrostatic pressure, which reduces solid body interactions (and consequently friction and wear). Depending on the degree of surface separation, different lubrication regimes can be distinguished.

Adequate lubrication allows smooth, continuous operation of machine elements, reduces the rate of wear, and prevents excessive stresses or seizures at bearings. When lubrication breaks down, components can rub destructively against each other, causing heat, local welding, destructive damage and failure.

As the load increases on the contacting surfaces, three distinct situations can be observed with respect to the mode of lubrication, which are called lubrication regimes:[citation needed]

Lubrication is required for correct operation of mechanical systems such as pistons, pumps, cams, bearings, turbines, cutting tools etc. where without lubrication the pressure between the surfaces in close proximity would generate enough heat for rapid surface damage which in a coarsened condition may literally weld the surfaces together, causing .

In some applications, such as piston engines, the film between the piston and the cylinder wall also seals the combustion chamber, preventing combustion gases from escaping into the crankcase.

If an engine required pressurised lubrication to, say, plain bearings, there would be an and an oil filter. On early engines (such as a ), where pressurised feed was not required splash lubrication would suffice.