Mādhava (c. 1340 – c. 1425) was an Indian mathematician and astronomer from the town believed to be present-day Aloor, Irinjalakuda in Thrissur District, Kerala, India. He is considered the founder of the Kerala school of astronomy and mathematics. One of the greatest mathematician-astronomers of the Middle Ages, Madhava made pioneering contributions to the study of infinite series, calculus, trigonometry, geometry, and algebra. He was the first to use infinite series approximations for a range of trigonometric functions, which has been called the "decisive step onward from the finite procedures of ancient mathematics to treat their limit-passage to infinity".[1]

Some scholars have also suggested that Madhava's work, through the writings of the Kerala school, may have been transmitted to Europe[5] via Jesuit missionaries and traders who were active around the ancient port of Muziris at the time. As a result, it may have had an influence on later European developments in analysis and calculus.[6]

Although there is some evidence of mathematical work in Kerala prior to Madhava (e.g., Sadratnamala c. 1300, a set of fragmentary results[7]), it is clear from citations that Madhava provided the creative impulse for the development of a rich mathematical tradition in medieval Kerala. However, except of a couple of them, most of Madhava's original works have been lost. He is referred to in the work of subsequent Kerala mathematicians, particularly in Nilakantha Somayaji's Tantrasangraha (c. 1500), as the source for several infinite series expansions, including sinθ and arctanθ. The 16th-century text Mahajyānayana prakāra (Method of Computing Great Sines) cites Madhava as the source for several series derivations for π. In Jyeṣṭhadeva's Yuktibhāṣā (c. 1530),[8] written in Malayalam, these series are presented with proofs in terms of the Taylor series expansions for polynomials like 1/(1+x2), with x = tanθ, etc.

Thus, what is explicitly Madhava's work is a source of some debate. The Yukti-dipika (also called the Tantrasangraha-vyakhya), possibly composed by Sankara Variyar, a student of Jyeṣṭhadeva, presents several versions of the series expansions for sinθ, cosθ, and arctanθ, as well as some products with radius and arclength, most versions of which appear in Yuktibhāṣā. For those that do not, Rajagopal and Rangachari have argued, quoting extensively from the original Sanskrit,[1] that since some of these have been attributed by Nilakantha to Madhava, possibly some of the other forms might also be the work of Madhava.

Others have speculated that the early text Karanapaddhati (c. 1375–1475), or the Mahajyānayana prakāra might have been written by Madhava, but this is unlikely.[3]

Karanapaddhati, along with the even earlier Keralese mathematics text Sadratnamala, as well as the Tantrasangraha and Yuktibhāṣā, were considered in an 1834 article by Charles Matthew Whish, which was the first to draw attention to their priority over Newton in discovering the Fluxion (Newton's name for differentials).[7] In the mid-20th century, the Russian scholar Jushkevich revisited the legacy of Madhava,[9] and a comprehensive look at the Kerala school was provided by Sarma in 1972.[10] 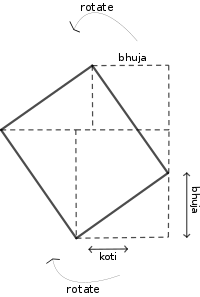 Explanation of the sine rule in Yuktibhāṣā

There are several known astronomers who preceded Madhava, including Kǖţalur Kizhār (2nd century),[11] Vararuci (4th century), and Sankaranarayana (866 AD). It is possible that other unknown figures may have preceded him. However, we have a clearer record of the tradition after Madhava. Parameshvara was a direct disciple. According to a palm leaf manuscript of a Malayalam commentary on the Surya Siddhanta, Parameswara's son Damodara (c. 1400–1500) had Nilakantha Somayaji as one of his disciples. Jyeshtadeva was a disciple of Nilakantha. Achyuta Pisharati of Trikkantiyur is mentioned as a disciple of Jyeṣṭhadeva, and the grammarian Melpathur Narayana Bhattathiri as his disciple.[8]

However, as stated above, which results are precisely Madhava's and which are those of his successors, are somewhat difficult to determine. The following presents a summary of results that have been attributed to Madhava by various scholars.

Among his many contributions, he discovered the infinite series for the trigonometric functions of sine, cosine, tangent and arctangent, and many methods for calculating the circumference of a circle. One of Madhava's series is known from the text Yuktibhāṣā, which contains the derivation and proof of the power series for inverse tangent, discovered by Madhava.[14] In the text, Jyeṣṭhadeva describes the series in the following manner:

The first term is the product of the given sine and radius of the desired arc divided by the cosine of the arc. The succeeding terms are obtained by a process of iteration when the first term is repeatedly multiplied by the square of the sine and divided by the square of the cosine. All the terms are then divided by the odd numbers 1, 3, 5, .... The arc is obtained by adding and subtracting respectively the terms of odd rank and those of even rank. It is laid down that the sine of the arc or that of its complement whichever is the smaller should be taken here as the given sine. Otherwise the terms obtained by this above iteration will not tend to the vanishing magnitude.[15]

This series is Gregory's series (named after James Gregory, who rediscovered it three centuries after Madhava). Even if we consider this particular series as the work of Jyeṣṭhadeva, it would pre-date Gregory by a century, and certainly other infinite series of a similar nature had been worked out by Madhava. Today, it is referred to as the Madhava-Gregory-Leibniz series.[15][16]

Madhava composed an accurate table of sines. Marking a quarter circle at twenty-four equal intervals, he gave the lengths of the half-chord (sines) corresponding to each of them. It is believed that he may have computed these values based on the series expansions:[4]

Madhava's work on the value of the mathematical constant Pi is cited in the Mahajyānayana prakāra ("Methods for the great sines").[citation needed] While some scholars such as Sarma[8] feel that this book may have been composed by Madhava himself, it is more likely the work of a 16th-century successor.[4] This text attributes most of the expansions to Madhava, and gives the following infinite series expansion of π, now known as the Madhava-Leibniz series:[17][18]

which he obtained from the power series expansion of the arc-tangent function. However, what is most impressive is that he also gave a correction term, Rn, for the error after computing the sum up to n terms. Madhava gave three expressions for a correction term Rn,[4] to be appended to the sum of n terms, namely

where the third correction leads to highly accurate computations of π.

It has long been speculated how Madhava might have found these correction terms.[19] They are the first three convergents of a finite continued fraction which, when combined with the original Madhava's series evaluated to n terms, yields about 3n/2 correct digits:

Madhava also carried out investigations into other series for arc lengths and the associated approximations to rational fractions of π, found methods of polynomial expansion, discovered tests of convergence of infinite series, and the analysis of infinite continued fractions.[3] He also discovered the solutions of transcendental equations by iteration, and found the approximation of transcendental numbers by continued fractions.[3]

Madhava laid the foundations for the development of calculus, which were further developed by his successors at the Kerala school of astronomy and mathematics.[13][22] (Certain ideas of calculus were known to earlier mathematicians.) Madhava also extended some results found in earlier works, including those of Bhāskara II. It is uncertain, however, whether any of these ideas were transmitted to the West, where calculus was developed independently by Isaac Newton and Leibniz.

K.V. Sarma has identified Madhava as the author of the following works:[23][24]

Kerala School of Astronomy and Mathematics

The Kerala school of astronomy and mathematics flourished for at least two centuries beyond Madhava. In Jyeṣṭhadeva we find the notion of integration, termed sankalitam, (lit. collection), as in the statement:

which translates as the integration a variable (pada) equals half that variable squared (varga); i.e. The integral of x dx is equal to x2 / 2. This is clearly a start to the process of integral calculus. A related result states that the area under a curve is its integral. Most of these results pre-date similar results in Europe by several centuries. In many senses, Jyeshthadeva's Yuktibhāṣā may be considered the world's first calculus text.[7][13][22]

The group also did much other work in astronomy; indeed many more pages are developed to astronomical computations than are for discussing analysis related results.[8]

The Kerala school also contributed much to linguistics (the relation between language and mathematics is an ancient Indian tradition, see Katyayana). The ayurvedic and poetic traditions of Kerala can also be traced back to this school. The famous poem, Narayaneeyam, was composed by Narayana Bhattathiri.

Madhava has been called "the greatest mathematician-astronomer of medieval India",[3] or as "the founder of mathematical analysis; some of his discoveries in this field show him to have possessed extraordinary intuition."[26] O'Connor and Robertson state that a fair assessment of Madhava is that he took the decisive step towards modern classical analysis.[4]

The Kerala school was well known in the 15th and 16th centuries, in the period of the first contact with European navigators in the Malabar Coast. At the time, the port of Muziris, near Sangamagrama, was a major center for maritime trade, and a number of Jesuit missionaries and traders were active in this region. Given the fame of the Kerala school, and the interest shown by some of the Jesuit groups during this period in local scholarship, some scholars, including G. Joseph of the U. Manchester have suggested[27] that the writings of the Kerala school may have also been transmitted to Europe around this time, which was still about a century before Newton.[6]