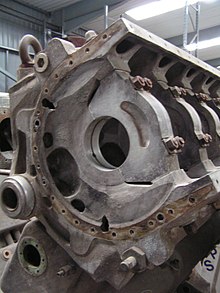 In a piston engine, the main bearings are the bearings which hold the crankshaft in place and allow it to rotate within the engine block.

Main bearings are usually plain bearings or journal bearings, held in place by the engine block and bearing caps. The number of main bearings per engine varies between engines, often in accordance with the forces produced by the operation of the engine.

The number of main bearings is primarily determined by the overall load factor and maximum engine speed.[1] Increasing the number of bearings in an engine will generally increase the size and cost of the engine, but also reduces bending stress and deflection caused by the distance from the crank pins to the nearest bearings. The number of bearings and crank pins can also have an effect on engine balance; a more stable crankshaft will better avoid unbalance from flexing, but increasing the crankshaft length or girth to accommodate an additional bearing increases the rotational inertia of the crankshaft, which can have the opposite effect.

Most engines have at least two main bearings— one at each end of the crankshaft. Additional bearing may be located along the crankshaft, sometimes as many as one bearing per crank pin, as used on many modern diesel engines and petrol engines designed for high RPM.[1]

Some small single-cylinder engines have only one main bearing,[citation needed] in which case it must withstand the bending moment created by the offset distance from the connecting rod to the main bearing.

The lower half of the main bearings are typically held in place by 'bearing caps' which are secured to the engine block using bolts. The basic arrangement is for each bearing cap to have two bolts, but some engines may have four or six bolts per bearing cap (often referred to as "four-bolt mains" or "six-bolt mains" engines). The additional bolts result in increased strength, allowing the engine to withstand higher power output or RPM.[4] However, the additional holes required for four- or six-bolt main bearings can increase the chance of hairline fractures developing in the engine block.[5]

The first car engine to use four-bolt main bearings was the V12 Maybach Zeppelin of 1928, that used them on three of its eight main bearings.[6]

The typical design for a six-bolt main bearing (as used by the General Motors LS engine and Ford Modular engine) is four vertical bolts (two on each side of the crankshaft) from the bottom extending into the block and two lateral cross-bolts coming from the left and right side pan rails into the side of the main caps to provide additional lateral strength.