This article is about the city. For other uses, see Mardin (disambiguation).
Metropolitan municipality in Southeastern Anatolia, Turkey

Mardin (Kurdish: Mêrdîn‎,[3] Ottoman Turkish: ماردين‎, romanized: Mārdīn, Syriac: ܡܪܕܝܢ‎, romanized: Mardīn[4][5]) is a city in southeastern Turkey. The capital of Mardin Province, it is known for the Artuqid (Artıklı or Artuklu in Turkish) architecture of its old city, and for its strategic location on a rocky hill near the Tigris River that rises steeply over the flat plains.[6] The city has a Kurdish majority with a significant Arab and Assyrian population.[7] A recent study from 2013 has shown that 49% of Mardin's population identify as Arabs.[8]

Close-up of the old town 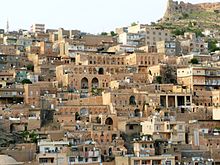 Another detail of the old town

The territory of Mardin and Karaca Dağ was known as in the Late Bronze Age (variously: KURAzalzi, KURAzalli, KURIzalla), and originally part of a Hurrian kingdom.

The ancient name was rendered as Izalā in Old Persian, and during the Achaemenid Empire (546-332 BCE) according to the Behistun Inscription it was still regarded as an integral part of the geo-political entity of Assyria (Achaemenid Assyria, Athura).[10]

It survived into the Assyrian Christian period as the name of Mt. Izala (Izla), on which in the early 4th century AD stood the monastery of Nisibis, housing seventy monks.[11]

In the Roman period, the city itself was known as Marida (Merida),[12][13] from a Syriac/Assyrian Neo-Aramaic language name translating to "fortress".[14][15]

Between c.150 BC and 250 AD (apart from a brief Roman intervention when it became a part of Assyria (Roman province) it was part of the Neo-Assyrian kingdom of Osroene.[16]

In the late 3rd century AD Shapur II conquered Mardin and Osroene into the Sassanid Empire (224-651 AD) after which the region became part of the province of Assuristan.

Byzantine Izala fell to the Seljuks in the 11th century. During the Artuqid period, many of Mardin's historic buildings were constructed, including several mosques, palaces, madrassas and khans. Mardin served as the capital of one of the two Artuqid branches during the 11th and 12th centuries. The lands of the Artukid dynasty fell to the Mongol invasion sometime between 1235 and 1243, but the Artuqids continued to govern as vassals of the Mongol Empire.[17] During the battle of Ain Jalut in 1260, the Artuqid governor revolted against Mongol rule. Hulagu's general and Chupan's ancestor, Koke-Ilge of the Jalayir, stormed the city and Hulegu appointed the rebel's son, al-Nasir, governor of Mardin. Although, Hulagu suspected the latter's loyalty for a while, thereafter the Artuqids remained loyal unlike nomadic Bedouin and Kurd tribes in the south western frontier. The Mongol Ilkhanids considered them important allies. For this loyalty they showed, Artuqids were given more lands in 1298 and 1304.[citation needed] Mardin later passed to the Aq Qoyunlu, a federation of Turkic tribes that controlled territory all the way to the Caspian Sea.

During the medieval period, the town (which retained significant Assyrian and Armenian populations) became the centre for episcopal sees of Armenian Apostolic, Armenian Catholic, Church of the East, Syriac Catholic, churches, as well as a stronghold of the Syriac Orthodox Church, whose patriarchal see was headquartered in the nearby Saffron Monastery from 1034 to 1924.[18] In 1451 the Kara Koyunlu besieged the castle of Mardin, damaging the city after their failed attempt to take the stronghold. About half a century later, in 1507, Ismail I of the Safavids succeeded to capture the city and the castle.[19] 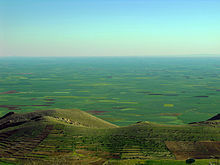 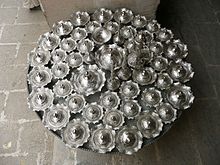 A few years later in 1515, the city yielded to the Ottomans, who were bitter rivals of the Safavid dynasty, though the castle still remained under the control of Ismail I. One year later, the Ottomans under the leadership of Selim I besieged the city anew and eventually annexed it in 1517.[19] During this time, Mardin was administered by a governor directly appointed under the Ottoman Sultan's authority.

The city experienced a relatively tranquil period under Ottoman rule, without any significant conflicts or plights. This period of peace was finally halted when the Ottoman Empire came into conflict with the Khedivate of Egypt. During this time the city came under the rule of insurgents associated with the Milli clan. In 1835, the Milli tribe was subdued by the military troops of the Wāli of Diyarbekir Eyalet, Reşid Mehmed Pasha.[20] Between 1847 and 1865 the city's population suffered from a notable cholera epidemic, with the exact number of fatalities not known.[19] During World War I Mardin was one of the sites affected by the Armenian Genocide. On the eve of World War I, Mardin was home to over 12,000 Assyrians and over 7,500 Armenians.[21] During the armed conflicts and plights caused by the war, many were sent to the Ras al-'Ayn Camps, though some managed to escape to the Sinjar Mountain with help from local Chechens.[22] Kurds and Arabs of Mardin typically refer to these events as "fırman" (government order), while Syriacs call it "seyfo" (sword).[23] After the Armistice of Mudros Mardin was one of the Turkish cities that was not occupied by the troops of the Allied Powers.

In 1923, with the founding of the Republic of Turkey, Mardin was made the administrative capital of a province named after it. Many Assyrian survivors of the violence later on left Mardin for nearby Qamishli in the 1940s after their conscription in the Turkish military became compulsory.[23]

Through a passed law in 2012 Mardin became a metropolitan municipality, which took office after the Turkish local elections in 2014.[24]

A bishopric of the Assyrian Church of the East was centred on the town when it was part of the Roman province of Assyria. It was a suffragan see of [Edessa], the provincial [metropolitan see]. 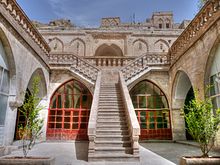 Mardin has often been considered an open-air museum due to its historical architecture. Most buildings use the beige colored limestone rock which has been mined for centuries in quarries around the area. 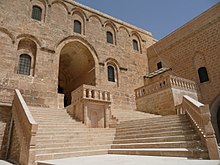 The Great Mosque of Mardin 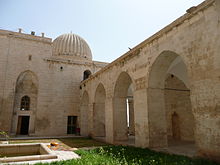 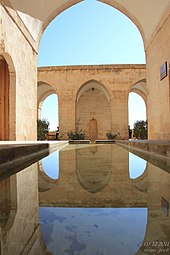 In the 2014 local elections, Ahmet Türk of the Democratic Regions Party (DBP)[35] was elected mayor of Mardin. However, on 21 November 2016 he was detained on terror charges after being dismissed from his post by Turkish authorities. A trustee was appointed as mayor instead.[36] In the Municipal elections in March 2019 he was re-elected. He was dismissed from his post in August 2019, accused of supporting terrorism.[37] Mustafa Yaman, the Governor of Mardin Province was appointed as acting mayor.[38]

During the late Permian ~250 mya the Afro-Arabian plate started opening up. The East African continental rift initiation is believed to have started around 27-31 million years ago with the beginning of the basaltic volcanism of the . This rift system would cause a contractional tectonic process to occur in which the Arabian Plate was pushed in a north-easterly direction towards the Eurasian plate. The divergence in the East African Rift would eventually cause the closure of the Tethys Ocean as the Arabian Plate made its first inception of collision with Eurasia between 25-23 million years ago, and complete closure around 10 mya and creation of the Mardin High.

Panorama of Mardin, with the Mesopotamian Plain opening to the right

Mardin has a hot-summer Mediterranean climate with hot, dry summers and cold, wet, and occasionally snowy winters. Temperatures in summer usually increase to 40 °C (104 °F) due to Mardin being situated right next to the border of Syria. Snowfall is quite common between the months of December and March, snowing for a week or two. Mardin has over 3000 hours of sun per year. The highest recorded temperature is 42.5 °C (108.5 °F). Average rainfall is about 641.4 mm (25 inches) per year.

Mardin is twinned with: