The Mazda B-series engine - not to be confused with the Mazda B-Series truck - is a small-sized, iron-block, inline four-cylinder with belt-driven SOHC and DOHC valvetrain ranging in displacement from 1.1 to 1.8 litres. It was used from front-wheel drive economy applications to the turbocharged full-time 4WD 323 GTX and rear-wheel drive Miata as well as numerous other models. The Mazda B-series is a "non-interference" design, meaning that breakage of its timing belt does not result in damage to valves or pistons, because the opening of the valves, the depth of the combustion chamber and (in some variants) the shaping of the piston crown allow sufficient clearance for the open valves in any possible piston position. 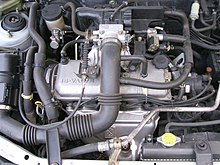 There was also a 16-valve, SOHC B5-MI version of the B5, usually fitted with single-point fuel injection ("EGi"). This engine was mainly used in the Japanese domestic market. The B5-ME, equipped with electronic fuel injection, was used by Kia for several of their cars as well as in the Mazda Demio.

Power and torque outputs varied across markets due to emission and fuel standards. The B6T available in North America came with 132 hp (98 kW) and 136 lb⋅ft (184 N⋅m). The Japanese version was slightly more powerful, producing 140 PS (103 kW) and 19.0 kg⋅m (186 N⋅m) due to better intake manifold design and its ability to run 100 octane fuel. For the special rally homologation BFMR Familia GT-Ae model released in 1987, power and torque were raised to 150 PS (110 kW) and 20.0 kg⋅m (196 N⋅m) respectively through the use of a slightly different turbocharger; engine internals remained otherwise identical.

The 1,839 cc (1.8 L) BP, featuring a bore x stroke of 83 mm × 85 mm (3.27 in × 3.35 in), is a DOHC 4 valves per cylinder variant of the B8. This Inline-four engine was called 'BP-ZE by Mazda engineers' and featured a forged crankshaft, piston oil squirters, a structural aluminium oil pan with cooling fins, a 7,000 rpm redline, and Variable Inertia Charging System (VICS) which is activated by a control solenoid at high rpm to increase horsepower in the upper rev range. The engine in base form on 91 RON fuel produces 96 kW (131 PS; 129 bhp) at 6,000 rpm and 165 N⋅m (122 lbf⋅ft) at 4,000 rpm. The engine is a favourite for both N/A and turbo motoring enthusiasts for its robust design, materials and construction. This particular variant can be found in the following vehicles:

There is also a non-performance SOHC version that is most easily recognized by its black stamped-steel oil pan. It also features a cast crankshaft, no oil squirters, a plastic oil pickup tube and less aggressive camshafts. It is found in the 1995-1998 Mazda Protege ES. 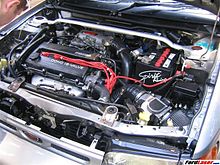 It featured an IHI RHB5 VJ20 turbocharger, sidemount intercooler, 330 cc blacktop injectors (high impedance). The BPT versions of the Familia and Laser were only available in AWD models, and featured a viscous LSD centre and rear differentials.

The mazda BPD engine (also commonly referred to as a BP2) was a revamp of the original BP engine (sometimes called BP1 for clarity's sake). It featured a larger crank nose, larger piston oil squirters, a main bearing support plate, better flowing inlet and exhaust ports. This was also the base engine for the Mazda Familia GT-R and GT-Ae. It is commonly known as the 'big turbo' variant as it utilised a much larger IHI RHF6CB water-cooled turbocharger(vj23). The BPD was used as the basis for the engine, with changes such as sodium-filled exhaust valves, larger (and front-mounted) intercooler, larger (440 cc) low impedance fuel injectors and stronger engine internals helping to up the performance of the engine to produce 209 hp (156 kW) and 184 lb·ft (255 N·m). The VICS system of the N/A BP has been removed, as well as the boost cut from the ecu. This engine was designed to power Mazda to a world rally championship win, and was thus used in the limited production Mazda Familia GT-R (2,200 built) and GTAe (300 built).

The 1999 MX-5 uses a modified BP, the BP-4W, which replaces the old hall effect dual Cam Angle Sensor unit mounted at the back of the exhaust cam with two separate Hall Effect units at the front - one on the intake cam gear and one mounted on the oil pump, to the side of the crankshaft pulley. It also has an improved intake system (a better flowing cylinder head because of the angle of the intake ports being changed). There was also a switch from the earlier problematic hydraulic lifters to solid lifters. The engine initially produced 140 hp at 6500 rpm, and 119 lb·ft at 5500 rpm. The United States 2004-2005 Mazdaspeed MX-5 turbo is based on this engine rather than the newer BP-Z3 and produces 178 bhp (180 PS; 133 kW) at 6000 rpm and 226 N⋅m; 166 lbf⋅ft (23 kg⋅m) of torque at 4500 rpm with slightly reduced compression ratio of 9.5:1.[15] The Mazdaspeed turbo engine has no VICS, but does have VTCS which is often mistaken to be related to VICS.

In 2001, Mazda introduced the still 1.8 L (1,839 cc) BP-Z3 (also called BP-VE) variant of the BP engine. It features S-VT variable valve timing on the intake side, no more VICS, but there is Variable Tumble Control System (VTCS) in the BP-Z3. A similar looking but effectively very different set of valves that restrict the intake on cold start for emissions purposes, rather than the torque enhancing set of partial butterflies that increase velocity that are used in VICS. This was found in the 2001+ Miata. The Z family is an evolution of this engine.