The Mazda Demio is a supermini manufactured and marketed globally by Mazda since 1996, currently in its fourth generation. The Demio is marketed prominently as the Mazda2 and under previous nameplates including Mazda 121, Mazda Metro and Ford Festiva Mini Wagon.

Originating with the introduction of the Mazda 121 in 1987, this B-segment small car was based on the Mazda D-platform. Ford also used a version of the first-generation DA 121 known as the Ford Festiva. Mazda later released the Autozam Revue in 1990 with the next generation of the D-platform DB. It was redesigned for January 1993, still based on the same DB platform. Kia also built versions of the DA and DB, both for itself and for Ford's sale as the Ford Aspire in the United States which Kia sold as the Pride and Avella. The name "Demio" is derived from Latin meus to show possession, which in many Romance languages has become "mio."

The "Demio" nameplate was discontinued in all remaining markets in September 2019, and replaced by the "Mazda2" moniker worldwide.[6][7]

When it came to redesigning the Revue, Mazda came up with a tall hatchback, minivan-esque package (the Revue was already over 1,500 mm (59.1 in) tall). Introduced in a time full of negative press coverage, the Demio became a surprise hit for Mazda in Japan, and also foreshadowed the current crop of B-segment minivans such as the Opel Meriva, Fiat Idea and the Renault Modus.

A concept model previewing the DW series, called the Mazda BU-X was shown in 1995.[8]

At its introduction in 1997, it won the Automotive Researchers' and Journalists' Conference Car of the Year award in Japan.

Production of the new Demio started in July 1996 (sold as the 121 outside Japan and Europe) used the DW platform. Ford retailed a version in Japan as the Ford Festiva Mini Wagon. In 1998, the Mazda logo was changed to the current logo. The Demio was updated in 1999 with a revised exterior, cabin air filtration, retuned automatic transmission, and available DSC due to a 2002 redesign.

The original DW model was produced in Mazda's Colombia plant as "Mazda Demio" until the end of 2007, when it was replaced by the DE model.

The Demio was redesigned in 2002 on the DY platform. The Demio name continued in Japan, while the rest of the world dropped 121 and other names in favor of Mazda2. Since its debut, the 2 has been well received by the market pushing its Japanese domestic sale to as high as seventh place. 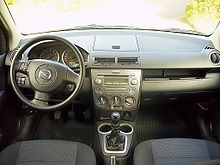 The badge-engineered Ford version, the Ford Fusion, is no longer made, as Ford began importing the Ford Fiesta on the global Ford B3 platform which is based on Mazda's DY platform.[10] Production of the car for European market started at Almussafes Ford plant in Valencia, Spain on 20 January 2003.[11]

All Demios come with ABS and EBD, and stability control is optional. An innovative feature offered in Japan is e-4WD, a hybrid car-type system which uses an electric motor to power the rear wheels of this front wheel drive vehicle when needed. In the Demio, this system is used only as a traction aid, not for increased fuel economy as in most other vehicles.

There are also a big difference in floorpan and pedal box - European-exclusive version of Mazda2 (DY) uses pedal box directly sourced from Ford Fiesta, rather than their own and also 4x108 bolt pattern instead of 4x100.

In Europe, trim levels were S, TS and TS2. The TS and TS2 were renamed Antares and Capella in 2004. The Japanese 1.3 and 1.5 gasoline engines are not available, but Ford's 1.25-liter 16-valve Sigma engine is used, and Mazda's 1.4 (in engine block is pressed Ford Motor CO) and 1.6 gasoline, plus Fords 1.4 TDCi diesel are offered, but called 1.4 CDTi by Mazda. (Virtually all the engine parts are interchangeable with the 1.4 diesel version of the Ford Fiesta and Ford Fusion of the same period).

The Mazda2 is sold with a variety of Z-family engines:

In 2004 Mazda introduced the Verisa in Japan. The Verisa is based on the Demio but targeted further upmarket.[citation needed]

The third generation Demio is built on the new DE platform, which Ford also used for the 2008 Ford Fiesta. It employs lightweight materials and reduces the overall dimensions of the car. This generation dropped the mini MPV high-roof styling adopted by its predecessor, instead opting for a more conventional hatchback look. The lead designer for the third generation was Ikuo Maeda, who was later promoted to Head of Design at Mazda in 2009.[14]

A three-door variant was released for the European market in 2008. Engine choices include the MZR 1.3-liter and 1.5-liter gasoline, MZ-CD 1.4-liter common-rail turbo diesel. In some EU Member States like the Netherlands, there is the option to buy the gasoline car in bi-fuel LPG version from the factory. This model was unveiled at the 2008 Geneva Motor Show.[21][22]

The North American version of the Mazda2 debuted at the 2009 LA Auto Show,[23] and later at the 2010 Canadian International AutoShow.[24] The Mazda2 became available in July, 2010 with the 1.5-liter, 100 hp four-cylinder and 5-speed manual or 4-speed automatic transmission.[25] Mazda discontinued the Mazda2 in the United States after the 2014 model year.[26]

The Chinese model of the Mazda2 in five-door hatchback body style launched at the 2007 Guangzhou Motor Show.[27] A Chinese four-door sedan model of the Mazda 2 was unveiled at the same event,[28] with sales beginning in January, 2008.[29]

The sedan body style was manufactured in Thailand and China and marketed only in Southeast Asia, Oceania, South America and the Caribbean.

In Australia, the sedan was introduced along with the facelifted hatchback in May 2010, with the sedan version being offered in a single 'Maxx' grade. In February 2011, Mazda Australia had reverted to Japanese sourced production, which lead to the discontinuation of the sedan being offered after just 9 months on-sale.

A digital fuel gauge is a standard feature and stability control is available, except in Australia, where it is standard. There are three trim levels available for the new 2 range, the first is known as the Neo which is the base model. It comes standard with air-conditioning and 15-inch steel wheels, though side air bags, 16-inch alloy wheels and a sports body kit come as standard on the range topping Genki.[33]

Chinese models were built in Changan Ford Mazda Automobile's Nanjing plant at the end of October 2007.[38]

The Demio EV is a limited (100 leased units) production electric vehicle for the Japanese market. It includes a 346-Volt 20kWh lithium-ion battery with 200 km (124 mi) driving range. Leasing began in October 2012.[60][61] 70% of Mazda2 BEV owners said they weren't happy with the 124-mile range of their electric car, even though they never needed more.[62]

Reports of a new generation of the Mazda Demio emerged in 2013[71][72] for a 2014 launch, with some manufacturing at the new Mazda plant in Mexico.[70][73] The Mazda Hazumi Concept model (designed to preview the future Mazda2 models) was unveiled at the 2014 Geneva Motor Show[74] and in April 2014 the development mule of the new generation Demio was undergoing testing in Germany, covered in camouflage.[75][76][77]

In July 2014, Mazda presented photos of the fourth generation Demio hatchback,[78] and production began at Mazda's Hōfu plant.[79] Sales in Japan began in September 2014. The sedan version debuted at the Thailand International Motor Expo in November 2014.[80][81]

The fourth generation is based on a variation of Mazda's CX-5 platform, rather than Ford's DE platform used on the Ford Fiesta[82] and features greater length, wider front and rear tracks, decreased interior room for rear-seat occupants and less front head and legroom.[83]

For the Canadian market, the DJ series Mazda2 was confirmed at the 2015 Montreal International Auto Show, however its launch was postponed to early 2016 to allow Mazda Canada focus on the launch of the CX-3 and the redesigned MX-5. On 16 November 2015, Mazda Canada decided to not launch the 2 because they found the car not eligible for the market as well a shift towards subcompact crossovers. However, as in the United States, the sedan variant is marketed as the Toyota Yaris sedan.[85]

In July 2019, it was announced that the Demio would be rebranded as the Mazda2 worldwide, and that the 2020 model year vehicles would receive an exterior facelift, various interior trim changes, revised suspension tuning to improve ride quality, improvements to the engine deceleration energy recovery system, adaptive headlights, and standard G-Vectoring Control Plus.[7]

The facelift model went on sale in Mexico in October 2019 for the 2020 model year. It comes in three versions: i, i Touring, and i Grand Touring with automatic transmission.[86]

The Mazda2 uses Mazda's SkyActiv-Drive six-speed automatic and SkyActiv-MT five- and six-speed manual gearboxes[87] as well as stop-start technology ("i-STOP" turns the engine off when the car is stationary) and a brake energy regeneration system ("i-ELOOP" uses braking to charge a capacitor for all car electronics, in place of an alternator charging a battery).[87]

In 2014, Mazda de México Vehicle Operation began production of the Mazda2 in Salamanca, Guanajuato for various North and South American markets.[88] This plant also produces a sedan version of the Mazda2 for Toyota with minor styling changes, with the vehicle sold in the United States as the Scion iA[89], in Canada as the Yaris sedan[90] and in Mexico as the Yaris R.[91]

In Mexico, the Mazda2-based Yaris R is sold alongside the more austere and lower-priced Yaris Sedán, which from early 2018 is a version of the Asian-market Toyota Yaris ATIV, and was previously a variant of the Toyota Vios.[98] The Yaris R sold in three versions.[99] However unlike the Canadian version and the Scion iA, the Yaris R does not feature cruise control nor a pre-collision warning system, and it is the only version of the rebadged sedan which has a leather steering wheel.[citation needed]

For the 2019 model year, the United States version was renamed again as the Yaris sedan, receiving a minor facelift with a new grille insert and trim changes.[3][4] Unlike the previous models, which offered only exterior colors and a choice between 6-speed manual and 6-speed automatic transmissions as factory options,[100] both the United States[3][4] and Canadian[101] 2019 Yaris sedans are offered in L, LE and XLE trim levels with a variety of interior and exterior options.[67]

In 2019, the Mazda2 hatchback was rebadged as the Yaris hatchback with a front fascia similar to that of the Yaris sedan, for the 2020 model year. The new model made its debut at the 2019 New York International Auto Show in April of that year.[102] The United States and Canadian market 2020 Yaris hatchback is offered in LE and XLE trim levels. In the United States, this vehicle went on sale in October 2019 and replaced the XP130 Vitz-based Yaris Liftback, which was discontinued in January 2019. Unlike the United States, XP130 sales continued in Canada for the 2019 model year, similarly being replaced by the rebadged Mazda2 hatchback for the 2020 model year.[103]

Both the Mazda2-based Yaris sedan and hatchback exports to the United States stopped in June 2020 due to new regulations and slow sales.[5]