This article is about the racing engine. For speed parts company, see Offenhauser Sales Corporation.

The Offenhauser Racing Engine, or Offy, is a racing engine design that dominated American open wheel racing for more than 50 years and is still popular among vintage sprint and midget car racers.

The Offenhauser engine, familiarly known as the "Offy", was developed by Fred Offenhauser featuring an array of design attributes learned from his teacher[failed verification] and employer Harry Arminius Miller.[1] Originally, it was sold as a marine engine. In 1930 a four-cylinder 151 cu in (2.47 l) Miller engine installed in a race car set a new international land speed record of 144.895 mph (233.186 km/h). Miller developed this engine into a twin overhead cam, four-cylinder, four-valve-per-cylinder 220 cu in (3.6 l) racing engine. Variations of this design were used in midgets and sprints into the 1960s,[2] with a choice of carburetion or Hilborn fuel injection.[3] When both Miller and the company to whom he had sold much of the equipment and rights went bankrupt in 1933, Offenhauser opened a shop a block away and bought rights to engines, special tooling and drawings at the bankruptcy auction, and he and other former Miller employees took over production. They and former Miller employee, draftsman Leo Goossen, further developed the Miller engines into the Offenhauser engines. Then in 1946 the name and engine designs were sold to Louis Meyer and Dale Drake. Meyer was bought out by Drake, his wife Eve and their son John in 1965. From then until Drake's son John sold the shop to Stewart Van Dyne, the Drake family designed and refined the engine until its final race days. It was under Meyer and Drake that the engine dominated the Indianapolis 500 and midget racing in the United States.[4]

From 1934 through the 1970s, the Offenhauser engine dominated American open wheel racing, winning the Indianapolis 500 27 times. From 1950 through 1960, Offenhauser-powered cars won the Indianapolis 500 and achieved all three podium positions, winning the pole position in 10 of the 11 years. In 1959 Lime Rock Park held a famous Formula Libre race, where Rodger Ward shocked the expensive and exotic sports car contingent by beating them on the road course in an Offenhauser powered midget car, which was normally considered competitive on oval tracks only. On the strength of this performance, the car was entered in the Formula 1 1959 US Grand Prix at Sebring where it was totally uncompetitive, setting a qualifying time of 3:43.8 compared to the pole time of 3 minutes dead and the slowest Formula 1 starter at 3:33.4.

When Ford came onto the scene in 1963, with much increased competition and sanctioning body rule changes,[failed verification] the Offy began to lose its domination over Indy car racing, although it remained a competitive winner through the mid-1970s even with the advent of turbocharging. Outputs over 1,000 bhp (750 kW) could be attained, using around 44.3 psi (3.05 bar) of boost pressure. The final 2.65-litre four-cylinder Offy, restricted to 24.6 psi (1.70 bar) boost, produced 770 bhp (570 kW) at 9,000 rpm. The Offy's final victory came at Trenton in 1978, in Gordon Johncock's Wildcat. The last time an Offy-powered car raced was at Pocono in 1982 for the Domino's Pizza Pocono 500, in an Eagle chassis driven by Jim McElreath, although two Vollstedt chassis with Offenhauser engines failed to qualify for the 1983 Indianapolis 500.

The Offenhauser shop began to do machine work for Lockheed in 1940, as the arms build-up for anticipated war began. The last prewar engine was shipped on July 17, 1941. After the Pearl Harbor attack, the plant worked overtime on hydraulic systems, getting Fred Offenhauser the money and the fatigue to retire. In 1944, Leo Goossen finally became a full-time Offenhauser employee.[4] 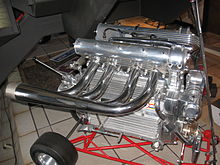 Offenhauser produced engine blocks in several sizes. These blocks could be bored out or sleeved to vary the cylinder bore, and could be used with crankshafts of various strokes, resulting in a wide variety of engine displacements. Offenhauser (and Meyer-Drake, in later years) frequently made blocks, pistons, rods, and crankshafts to specific customer requests. However, certain engine sizes were common, and could be considered the "standard" Offenhauser engines:[4]

In their 11 world championship years, the Meyer-Drake Offenhauser engine partnered for at least one race with the following 35 constructors: