Part of a reciprocating engine

Two piston rings mounted on a two-stroke engine piston. The ring gap for the bottom ring is visible in the centre of the image.

A piston ring is a metallic split ring that is attached to the outer diameter of a piston in an internal combustion engine or steam engine.

The main functions of piston rings in engines are:

Most piston rings are made from cast iron or steel. 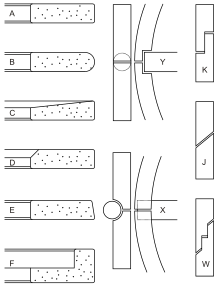 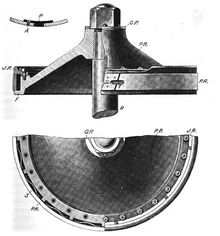 Piston ring. The piston ring (PR) is a split band pressed against the wall of the cylinder by springs (S) mounted in the inner "junk ring" (JR). The tongue (T) maintains the seal as the ring expands and splits apart.

Lubrication of piston rings is difficult and has been a driving force to improvements in the quality of motor oil. The oil must survive high temperatures and harsh conditions with a high-speed sliding contact. Lubrication is particularly difficult as the rings have an oscillating motion rather than continuous rotation (such as in a bearing journal). At the limits of piston movement, the ring stops and reverses direction. This disrupts the normal oil wedge effect of a hydrodynamic bearing, reducing the effectiveness of the lubrication.

Rings are also sprung to increase the contact force and to maintain a close seal. The spring force is provided by either the stiffness of the ring itself or by a separate spring behind the seal ring.

It is important that rings float freely in their grooves within the piston, so that they can stay in contact with the cylinder.[5] Rings binding in the piston, usually due to a build-up of either combustion products or a breakdown of the lubricating oil, can cause engine failure and is a common cause of failure for diesel engines.[citation needed]

Sealing is often achieved by multiple rings, each with their own function, using a metal-on-metal sliding contact. Most pistons have at least two piston rings per cylinder.

Automotive piston engines typically have three rings per cylinder.[6] The top two rings— known as compression rings— are primarily for sealing the combustion chamber. The bottom ring— known as the oil control ring— is primarily for controlling the supply of oil to the cylinder wall, in order to lubricate the piston skirt and the oil control rings.[7]

Oil control rings are typically made from either a single piece of cast iron, multiple pieces of steel, or steel/iron with a helical spring backing to create the tension required for a close seal. Cast iron oil rings and rings with a helical spring backing have two scraping lands of various detailed form. On the other hand, multi-piece steel oil control rings usually consist of two thin steel rings (called rails) with a spacer-expander spring between them to keep the two rails apart and provide radial pressure.

The gap in the piston ring compresses to a few thousandths of an inch when inside the cylinder bore. Ring gap shapes include square cut, angle cut, tite joint, step cut, hook step and mitre step.[8] 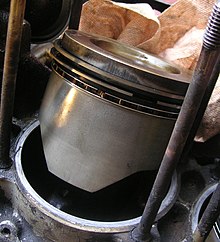 Early steam engines used a hemp packing to seal the combustion chamber,[9] which caused high frictional resistance and did not provide a very effective seal.

The modern design of a metallic split-ring was invented by John Ramsbottom in the 1850s. Ramsbottom's initial design in 1852 was a circular shape, however these wore unevenly and were not successful. In 1854, a revised design was claimed to have a lifespan of up to 4,000 mi (6,437 km).[10] This was based on the discovery that a perfectly round (prior to installation) ring with a split in it does not exert an even pressure on the cylinder walls once installed. The revised piston ring was manufactured to an out-of-round shape, so that it would exert even pressure once installed in the cylinder. An 1855 patent documented this change. The switch to metallic piston rings dramatically reduced the frictional resistance, the leakage of steam, and the mass of the piston, leading to significant increases in power and efficiency and longer maintenance intervals.

Piston rings are subject to wear as they move up and down the cylinder bore, due to their own inherent load and due to the gas load acting on the ring. To minimize this, they are made of wear-resistant materials, such as cast iron and steel, and are coated or treated to enhance the wear resistance. Coatings used in modern motorcycles include chromium,[11] nitride,[12] or ceramic coating made by plasma deposition[13] or physical vapour deposition (PVD).[14][15] Most modern diesel engines have top rings coated with a modified chromium coating (known as CKS or GDC),[11][dead link] which has aluminium oxide or diamond particles respectively included in the chrome surface.

In two-stroke engines, the port design is also an important factor for the lifespan of the piston rings.