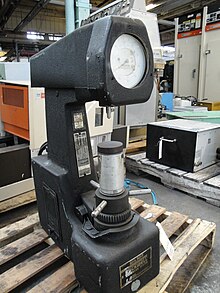 The Rockwell scale is a hardness scale based on indentation hardness of a material. The Rockwell test measuring the depth of penetration of an indenter under a large load (major load) compared to the penetration made by a preload (minor load).[1] There are different scales, denoted by a single letter, that use different loads or indenters. The result is a dimensionless number noted as HRA, HRB, HRC, etc., where the last letter is the respective Rockwell scale (see below). When testing metals, indentation hardness correlates linearly with tensile strength.[2]

The differential depth hardness measurement was conceived in 1908 by a Viennese professor Paul Ludwik in his book Die Kegelprobe (crudely, "the cone test").[3] The differential-depth method subtracted out the errors associated with the mechanical imperfections of the system, such as backlash and surface imperfections. The Brinell hardness test, invented in Sweden, was developed earlier – in 1900 – but it was slow, not useful on fully hardened steel, and left too large an impression to be considered nondestructive.

(1890–1957) and (1886–1940) from Connecticut in the United States co-invented the "Rockwell hardness tester," a differential-depth machine. They applied for a patent on July 15, 1914.[4] The requirement for this tester was to quickly determine the effects of heat treatment on steel bearing races. The application was subsequently approved on February 11, 1919, and holds U.S. Patent 1,294,171. At the time of invention, both Hugh and Stanley Rockwell worked for the New Departure Manufacturing Co. of Bristol, CT.[5] New Departure was a major ball bearing manufacturer which in 1916 became part of United Motors and, shortly thereafter, General Motors Corp.

After leaving the Connecticut company, Stanley Rockwell, then in Syracuse, NY, applied for an improvement to the original invention on September 11, 1919, which was approved on November 18, 1924. The new tester holds U.S. Patent 1,516,207.[6][7] Rockwell moved to West Hartford, CT, and made an additional improvement in 1921.[7] Stanley collaborated with instrument manufacturer Charles H. Wilson of the Wilson-Mauelen Company in 1920 to commercialize his invention and develop standardized testing machines.[8] Stanley started a heat-treating firm circa 1923, the Stanley P. Rockwell Company, which still exists in Hartford, CT. The later-named Wilson Mechanical Instrument Company has changed ownership over the years, and was acquired by Instron Corp. in 1993.[9] 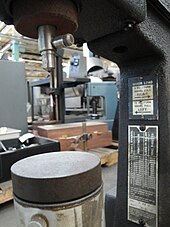 A closeup of the indenter and anvil on a Rockwell-type hardness tester.

The determination of the Rockwell hardness of a material involves the application of a minor load followed by a major load. The minor load establishes the zero position. The major load is applied, then removed while still maintaining the minor load. The depth of penetration from the zero datum is measured from a dial, on which a harder material gives a higher number. That is, the penetration depth and hardness are inversely proportional. The chief advantage of Rockwell hardness is its ability to display hardness values directly, thus obviating tedious calculations involved in other hardness measurement techniques.

The equation for Rockwell Hardness is

, where d is the depth (from the zero load point), and N and s are scale factors that depend on the scale of the test being used (see following section).

It is typically used in engineering and metallurgy. Its commercial popularity arises from its speed, reliability, robustness, resolution and small area of indentation.

In order to get a reliable reading the thickness of the test-piece should be at least 10 times the depth of the indentation.[13] Also, readings should be taken from a flat perpendicular surface, because convex surfaces give lower readings. A correction factor can be used if the hardness of a convex surface is to be measured.[14]

There are several alternative scales, the most commonly used being the "B" and "C" scales. Both express hardness as an arbitrary dimensionless number.

The B and C scales overlap, such that readings below HRC 20 and those above HRB 100, generally considered unreliable, need not be taken or specified.

Several other scales, including the extensive A-scale, are used for specialized applications. There are special scales for measuring case-hardened specimens.