The Rolls-Royce Eagle was the first aircraft engine to be developed by Rolls-Royce Limited. Introduced in 1915 to meet British military requirements during World War I, it was used to power the Handley Page Type O bombers and a number of other military aircraft.

The Eagle was the first engine to make a non-stop trans-Atlantic crossing by aeroplane when two Eagles powered the converted Vickers Vimy bomber on the Transatlantic flight of Alcock and Brown in June 1919.

At the outbreak of World War I in August 1914, the Royal Aircraft Factory asked Rolls-Royce to develop a new 200 hp (150 kW) air-cooled engine. Despite initial reluctance they agreed on condition that it be cooled by water rather than air, as this was the company's area of expertise.[1]

Development of the new 20 litre engine was led by Henry Royce from his home in Kent. Based initially on the 7.4 litre 40/50 Rolls-Royce Silver Ghost engine, and drawing also on the design of a 7.2 litre Daimler DF80 aero engine used in a 1913 Grand Prix Mercedes that had been acquired,[2] the power was increased by doubling the number of cylinders to twelve and increasing their stroke to 6.5 inches (170 mm), although their bore remained at 4.5 inches (110 mm) of the 40/50. The engine was also run faster, and an epicyclic reduction gear was designed to keep the propeller speed below 1,100 rpm. To reduce inertia and improve performance the valvetrain design was changed from sidevalves to a SOHC design,[3] closely following the original "side-slot" rocker arm design philosophy used on the contemporary German Mercedes D.I, Mercedes D.II and Mercedes D.III straight-six aviation powerplants.

Rolls-Royce Eagle engines at Derby in 1919

The Eagle was developed further during 1916 and 1917, with power being progressively increased from 225 hp (168 kW) to 266 hp (198 kW), followed by 284 hp (212 kW), and then 322 hp (240 kW), and finally 360 hp (270 kW) by February 1918 by which time eight Eagle variants had been produced.[4] [5] Throughout World War I Rolls-Royce struggled to build Eagles in the quantities required by the War Office, but the company resisted pressure to license other manufacturers to produce it, fearing that the engine's much admired quality would risk being compromised.[6]

After the War, a Mark IX version of the Eagle was developed for civilian use. Production continued until 1928, and in total 4,681 Eagle engines were built.[7] 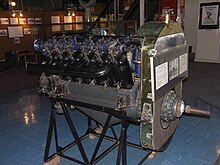 Examples of the Rolls-Royce Eagle are on display at the:

One of the two Eagles that powered Alcock and Brown's historic transatlantic flight is on display at the Derby Industrial Museum.[10]