The Rolls-Royce Griffon is a British 37-litre (2,240 cu in) capacity, 60-degree V-12, liquid-cooled aero engine designed and built by Rolls-Royce Limited. In keeping with company convention, the Griffon was named after a bird of prey, in this case the griffon vulture.

Design work on the Griffon started in 1938 at the request of the Fleet Air Arm, for use in new aircraft designs such as the Fairey Firefly. In 1939 it was also decided that the engine could be adapted for use in the Spitfire. Development was stopped temporarily to concentrate efforts on the smaller Merlin and the 24-cylinder Vulture; the engine did not go into production until the early 1940s.

The Griffon was the last in the line of V-12 aero engines to be produced by Rolls-Royce with production ceasing in 1955. Griffon engines remain in Royal Air Force service today with the Battle of Britain Memorial Flight and power the last remaining airworthy Avro Shackleton.

According to Arthur Rubbra's memoirs, a de-rated version of the "R" engine, known by the name Griffon at that time, was tested in 1933. This engine, R11,[1] which was never flown, was used for "Moderately Supercharged Buzzard development" (which was not proceeded with until much later), and bore no direct relationship to the volume-produced Griffon of the 1940s.

In 1938 the Fleet Air Arm approached Rolls-Royce and asked whether a larger version of the Merlin could be designed. The requirements were that the new engine have good power at low altitude and that it be reliable and easy to service.[2] Work began on the design of the engine soon afterwards.[nb 1] The design process was relatively smooth compared with that of the Merlin, and the first of three prototype Griffon Is first ran in the Experimental Department on 30 November 1939.[3][4]

Although the Griffon was designed for naval aircraft, on 8 November 1939 N E Rowe of the Air Ministry suggested fitting the Griffon in a Spitfire. Three weeks later permission was given to Supermarine to explore the possibilities of adapting the Griffon to the Spitfire; in response Supermarine issued 'Specification 466' on 4 December. This decision led to a change in the disposition of the engine accessories to reduce the frontal area of the engine as much as possible.[4] As a result, the frontal area of the bare Griffon engine was 7.9 square feet (0.73 m2) compared with 7.5 square feet (0.70 m2) of the Merlin, despite the Griffon's much larger capacity.[5] This redesigned engine first ran on 26 June 1940 and went into production as the Griffon II.

In early 1940, with the expected Battle of Britain looming, on the orders of Lord Beaverbrook, Minister of Aircraft Production, work on the new engine had been halted temporarily to concentrate on the smaller 27 L (1,650 cu in) Merlin which had already surpassed the output achieved with the early Griffon. 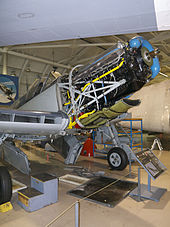 A Griffon installed on WH632, an airworthy Fairey Firefly at the Canadian Warplane Heritage Museum (2014)

Compared with earlier Rolls-Royce designs, the Griffon engine featured several improvements, which meant that it was physically only slightly larger than the Merlin, in spite of its 36% larger capacity of 37-litres (2,240 cu in).[2]

One significant difference was the incorporation of the camshaft and magneto drives into the propeller reduction gears at the front of the engine, rather than using a separate system of gears driven from the back end of the crankshaft; this allowed the overall length of the engine to be reduced as well as making the drive train more reliable and efficient.[6][nb 2] The drive for the supercharger was also taken off the front of the engine, which had required a long shaft to run to its location at the back of the engine.[7]

The Merlin engine's crankshaft lubrication was via a gallery cut into the engine block to feed each main bearing and then onto a secondary adjacent big end bearing via a gallery in the crankshaft itself. The crankpin was second in line to the main bearing in oil flow and pressure, with oil having to flow through the main bearing first. The Griffon improved on this arrangement being the first Rolls-Royce production aero engine to use a hollow crankshaft as the means of lubricating the main and big end bearings, with oil being fed from each end of the crankshaft giving even flow to all bearings.[6][8]

In another change from convention, one high efficiency B.T.H-manufactured dual magneto was mounted on top of the propeller reduction casing;[9] earlier Rolls-Royce designs using twin magnetos mounted at the rear of the engine.[10]

The Griffon 61 series introduced a two-stage supercharger and other design changes: the pressure oil pumps were now housed internally within the sump and an effort was made to remove as many external pipes as possible.[11] In addition, the drive for the supercharger was moved to the crankshaft at the back of the engine, via a short torsion shaft, rather than at the front of the engine, using a long drive shaft as used by earlier Griffon variants.[7]

Production of the aero version of the Griffon ended in December 1955, while a marine version, the Sea Griffon, continued to be produced for the RAF's High Speed Launches.[12] 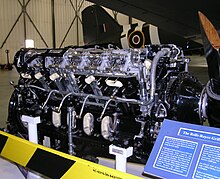 Griffon, cut away to show camshaft drives etc., at the Battle of Britain Museum at RAF Coningsby

Cylinders
Twelve cylinders consisting of high-carbon steel, floating wet liners[15] set in two, two-piece cylinder blocks of cast aluminium alloy having separate heads and skirts. Cylinder liners chromium plated in the bores for ​2 1⁄2 inches from the head.[15] Cylinder blocks mounted with an included 60-degree angle onto inclined upper faces of a two-piece crankcase. Cylinder heads fitted with cast-iron inlet valve guides, phosphor bronze exhaust valve guides, and renewable "Silchrome" steel-alloy valve seats. Two diametrically opposed spark plugs protrude into each combustion chamber.
Pistons
Machined from "R.R.59" alloy forgings. Fully floating gudgeon pins of hardened nickel-chrome steel. Two compression and one drilled oil-control ring above the gudgeon pin, and another drilled oil-control ring below.
Connecting rods
H-section machined nickel-steel forgings, each pair consisting of a plain and a forked rod. The forked rod carries a nickel-steel bearing block which accommodates steel-backed lead-bronze-alloy bearing shells. The "small-end" of each rod houses a floating phosphor bronze bush.
Crankshaft
One-piece, machined from a nitrogen-hardened nickel-chrome molybdenum steel forging. Statically and dynamically balanced. Seven main bearings and six throws. Internal oilway, with feed from both ends, used to distribute lubricants to main and big end bearings.[6] "Floating" front end bearing consisting of an internally toothed annulus bolted to crankshaft, meshing with and incorporating a semi-floating ring, internally splined to a short coupling shaft. Coupling shaft splined at front end to driving wheel of propeller reduction gear.[6] Clockwise rotation when viewed from rear.
Crankcase
Two aluminium-alloy castings joined together on the horizontal centreline. The upper portion bears the wheelcase, cylinder blocks and part of the housing for the airscrew reduction gear; and carries the crankshaft main bearings (split mild-steel shells lined with lead–bronze alloy). The lower half forms an oil sump and carries the main pressure oil pump, supercharger change-speed operating pump and two scavenge pumps. It also houses the main coolant pump which is driven through the same gear-train as the oil pumps.
Wheelcase
Aluminium-alloy casting fitted to rear of crankcase. Carries the supercharger; and houses drives to the supercharger, auxiliary gearbox coupling, engine speed indicator, airscrew constant-speed unit, intercooler pump and fuel pump, as well as the oil and coolant pumps in the lower half crankcase.
Valve gear
Two inlet and two exhaust poppet valves of "" austenitic nickel-chrome steel per cylinder. Exhaust valves have sodium-cooled stems. "Brightray" (nickel-chromium) protective coating to the whole of the combustion face and seat of the exhaust valves, and to the seat only of the inlet valves. Each valve is held closed by a pair of concentric coil springs. A single, seven-bearing camshaft, located centrally on the top of each cylinder head operates 24 individual steel rockers; 12 pivoting from a rocker shaft on the inner, intake side of the block to actuate the exhaust valves, the others pivoting from a shaft on the exhaust side of the block to actuate the inlet valves.

Although it is common practice to compare different piston engines and their performance potential by referring to the engine displacement or swept volume, this does not give an accurate reading of an engine's capabilities. According to A C Lovesey, who was in charge of the Merlin's development,[nb 3] "The impression still prevails that the static capacity known as the swept volume is the basis of comparison of the possible power output for different types of engine, but this is not the case because the output of the engine depends solely on the mass of air it can be made to consume efficiently, and in this respect the supercharger plays the most important role."[16]

Unlike the Merlin, the Griffon was designed from the outset to use a single-stage supercharger driven by a two-speed, hydraulically operated gearbox; the production versions, the Griffon II, III, IV, and VI series, were designed to give their maximum power at low altitudes and were mainly used by the Fleet Air Arm. The Griffon 60, 70, and 80 series featured two-stage supercharging and achieved their maximum power at low to medium altitudes. The Griffon 101, 121, and 130 series engines, collectively designated Griffon 3 SML,[17] used a two-stage, three-speed supercharger, adding a set of "Low Supercharger (L.S)" gears to the already existing Medium and Full Supercharger (M.S and F.S) gears.[17] Another modification was to increase the diameters of both impellers, thus increasing the rated altitudes at which maximum power could be generated in each gear.[18] While the 101 continued to drive a five-blade propeller, the 121 and 130 series were designed to drive contra-rotating propellers.[17] In 1946 a Griffon 101 was fitted to the Supermarine Spiteful XVI, RB518 (a re-engined production Mk.XIV); this aircraft achieved a maximum speed of 494 mph (795 km/h) with full military equipment.[19]

Pilots who converted from the Merlin to the Griffon-engined Spitfires soon discovered that, because the Griffon engine's propeller rotated in the opposite direction to that of the Merlin, the fighter swung to the right on takeoff rather than to the left.[20][nb 4] This tendency was even more marked with the more powerful 60- and 80-series Griffon engines, with their five-bladed propellers. As a result, pilots had to learn to apply left (port) trim on takeoff, instead of the right (starboard) trim they were used to applying.[21] On takeoff, the throttle had to be opened slowly, as the pronounced swing to the right could lead to "crabbing" and severe tyre wear.[22]

The Griffon was produced in approximately 50 different variants, the Griffon 130 being the last in the series. Details of representative variants are listed below: 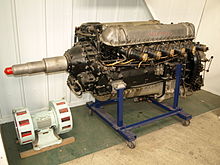 A Rolls-Royce Griffon 58 displayed at the Shuttleworth Collection (2008)

Several North American Mustangs raced in the Unlimited Class races at the Reno Air Races have been fitted with Griffons. These include the RB51 Red Baron (NL7715C),[30] "" (N6WJ) [31][32] and a Mustang/Learjet hybrid "Miss Ashley II" (N57LR).[33] In all cases, Griffons with contra-rotating propellers, taken from Avro Shackleton patrol bombers were used in these aircraft. The RB51 Red Baron is noteworthy for holding the FAI piston-engine 3-kilometre world speed record from 1979 to 1989 (499.018 mph).

The 1980 Miss Budweiser Unlimited Hydroplane dominated the race circuit with a Rolls-Royce Griffon engine. It was the last of the competitive piston-engined boats, before turboshaft powerplants took over.

The Griffon engine continues to be used in restored Fireflies and later mark Spitfires worldwide. The Royal Air Force Battle of Britain Memorial Flight is a notable current operator of the Griffon.

The sole remaining technically airworthy Avro Shackleton is based at the Air Force Base Ysterplaat.[35] However, at least one further airframe is in running condition at the Gatwick Aviation Museum and another is in running, taxiing condition at Coventry Airport, intended to be flown in a short time.

Preserved Griffon engines are on public display at the: 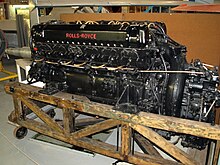