Rotax is the brand name for a range of internal combustion engines developed and manufactured by the Austrian company BRP-Rotax GmbH & Co KG[1] (until 2016 BRP-Powertrain GmbH & Co. KG), in turn owned by the Canadian Bombardier Recreational Products.

Rotax four-stroke and advanced two-stroke engines are used in a wide variety of small land, sea and airborne vehicles. Bombardier Recreational Products (BRP) use them in their own range of such vehicles.[2] In the light aircraft class, in 1998 Rotax outsold all other aero engine manufacturers combined.[3]

The company was founded in 1920 in Dresden, Germany, as ROTAX-WERK AG. In 1930, it was taken over by Fichtel & Sachs and transferred its operations to Schweinfurt, Germany. Operations were moved to Wels, Austria, in 1943 and finally to Gunskirchen, Austria, in 1947. In 1959, the majority of Rotax shares were taken over[4] by the Vienna-based Lohner-Werke, a manufacturer of car and railway wagon bodies. 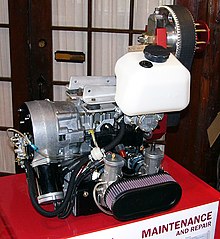 Rotax engines designed specifically for light aircraft include both four-stroke and two-stroke models.

Historical models no longer in production include:

The company developed the Rotax MAX engine for Karting. This 2-stroke engine series was launched in 1997.[6]