The Sports Car Club of America (SCCA) is a non-profit[2] American automobile club and sanctioning body supporting road racing, rallying, and autocross in the United States. Formed in 1944, it runs many programs for both amateur and professional racers.

The SCCA traces its roots to the Automobile Racing Club of America (not to be confused with the current stock car series of the same name). ARCA was founded in 1933 by brothers Miles and Sam Collier, and dissolved in 1941 at the outbreak of World War II.[3][4] The SCCA was formed in 1944 as an enthusiast group.[5] The SCCA began sanctioning road racing in 1948 with the inaugural Watkins Glen Grand Prix. Cameron Argetsinger, an SCCA member and local enthusiast who would later become Director of Pro Racing and Executive Director of the SCCA, helped organize the event for the SCCA.

In 1951, the SCCA National Sports Car Championship was formed from existing marquee events around the nation, including Watkins Glen, Pebble Beach, and Elkhart Lake.[6] Many early SCCA events were held on disused air force bases, organized with the help of Air Force General Curtis LeMay, a renowned enthusiast of sports car racing. LeMay loaned out facilities of Strategic Air Command bases for the SCCA's use; the SCCA relied heavily on these venues during the early and mid-1950s during the transition from street racing to permanent circuits.[7]

By 1962, the SCCA was tasked with managing the U.S. World Sportscar Championship rounds at Daytona, Sebring, Bridgehampton and Watkins Glen. The club was also involved in the Formula 1 U.S. Grand Prix. SCCA Executive Director John Bishop helped to create the United States Road Racing Championship series for Group 7 sports cars to recover races that had been taken by rival USAC Road Racing Championship. Bishop was also instrumental in founding the SCCA Trans-Am Series and the SCCA/CASC Can-Am series. In 1969, tension and infighting over Pro Racing's autonomy caused Bishop to resign and help form the International Motor Sports Association.[8]

Trans Am car of Ty Dillon

The SCCA dropped its amateur policy in 1962 and began sanctioning professional racing.[9] In 1963, the United States Road Racing Championship was formed. In 1966 the Canadian-American Challenge Cup (Can-Am) was created for Group 7 open-top sportscars. The Trans-Am Series for pony cars also began in 1966. Today, Trans-Am uses GT-1 class regulations, giving amateur drivers a chance to race professionally. A professional series for open-wheel racing cars was introduced in 1967 as the SCCA Grand Prix Championship.[10] This series was then held under various names through to the 1976 SCCA/USAC Formula 5000 Championship.

The Club Racing program is a road racing division where drivers race on either dedicated race tracks or on temporary street circuits.[11] Competitors require either a regional or a national racing license. Both modified production cars (ranging from lightly modified cars with only extra safety equipment to heavily modified cars that retain only the basic shape of the original vehicle) and designed-from-scratch "formula" and "sports racer" cars can be used in Club Racing. Most of the participants in the Club Racing program are unpaid amateurs, but some go on to professional racing careers. The club is also the source for race workers in all specialties.

The autocross program is branded as "Solo".[14] Up to four cars at a time run on a course laid out with traffic cones on a large paved surface, such as a parking lot or airport runway, without interfering with one another.

Competitions are held at the regional, divisional, and national levels. A national champion in each class is determined at the national championship (usually referred to as "Nationals") held in September. In 2009, Solo Nationals moved to the Lincoln Airpark in Lincoln, Nebraska.[15] Individual national-level events called "Championship Tours" and "Match Tours" are held throughout the racing season. The SCCA also holds national-level events in an alternate format called "ProSolo". In ProSolo, two cars compete at the same time on mirror-image courses with drag racing-style starts, complete with reaction and 60-foot times. Class winners and other qualifiers (based on time differential against the class winner) then compete in a handicapped elimination round called the "Challenge". Points are awarded in both class and Challenge competition, and an annual champion is crowned each September at the ProSolo Finale event in Lincoln, Nebraska. 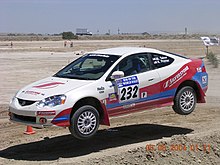 The SCCA sanctions "RallyCross" events, similar to autocross, but on a non-paved course.[16] SCCA ProRally was a national performance rally series similar to the World Rally Championship. At the end of the 2004 season SCCA dropped ProRally and ClubRally. A new organization, Rally America, picked up both series starting in 2005.

Road rallies are run on open, public roads.[17] These are not races in the sense of speed, but of precision and navigation. The object is to drive on time, arriving at checkpoints with the proper amount of elapsed time from the previous checkpoint. Competitors do not know where the checkpoints are.

In recent years, the SCCA has expanded and re-organized some of the higher-speed events under the Time Trials banner.[18] These include Performance Driving Experience ("PDX"), Club Trials, Track Trials, and Hill Climb events. PDX events are non-competition HPDE-type events and consist of driver-education and car control classroom learning combined with on-track instruction.

The SCCA is organized into six conferences, nine divisions and 115 regions, each organizing events in that area to make the events more accessible to people throughout the country. The number of divisions has increased since the SCCA's foundation. Northern Pacific and Southern Pacific started as a single Pacific Coast Division until dividing in 1966. Rocky Mountain Division is a relatively recent split. The Great Lakes Division was split from the Central Division at the end of 2006.