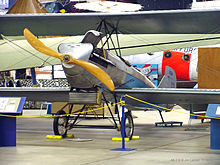 Scimitar propeller on a 1926 Alexander Eaglerock 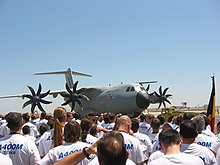 Eight-blade scimitar propellers on the A400M

A scimitar propeller is shaped like a scimitar sword, with increasing sweep along the leading edge. Typically scimitar propellers are constructed of lightweight or composite materials. In the early 1900s, as established by the French aeronautical inventor Lucien Chauvière and his commercial success with his scimitar-shaped Integrale propeller design,[1] they were made of laminated wood. The combination of light weight and efficient aerodynamics results in more power and reduced noise.

Turboprops operate best at speeds below about 450 mph (725 km/h). All propellers lose efficiency at high speed, due to an effect known as wave drag, which occurs just below supersonic speeds. This powerful form of drag exhibits sudden onset, and it led to the concept of a sound barrier when it was first encountered in the 1940s.[citation needed] In the case of a propeller, this effect can happen when the propeller turns fast enough that the tips of the blades approach the speed of sound, even if the plane itself is not moving forward.

This can be controlled to some degree by adding more blades to the prop, thus producing more thrust at a lower rotational speed. This is why some World War II fighters started with two-blade props and were using five-blade designs by the end of the war. The only downside of this approach is that adding blades makes the propeller harder to balance and maintain. At some point, though, the forward speed of the plane combined with the rotational speed of the propeller will once again result in wave-drag problems. For most aircraft, this will occur at speeds over about 450 mph (725 km/h). 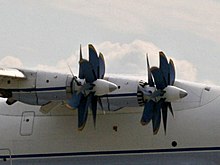 Progress propfan on the Antonov An-70

A method of decreasing wave drag was discovered by German researchers in World War II: sweeping the wing backward. Today, almost all aircraft designed to fly much above 450 mph (700 km/h) use a swept wing. In the 1940s, NACA started researching propellers with similar sweep. Since the inside of the propeller is moving more slowly than the outside, the blade becomes progressively more swept toward the outside, leading to a curved shape similar to that of a scimitar.

The propfan concept was intended to deliver 35% better fuel efficiency than contemporary turbofans, and in this they succeeded. In static and air tests on a modified DC-9, propfans reached a 30% improvement. This efficiency comes at a price, as one of the major problems with the propfan is noise, particularly in an era where aircraft are required to comply with increasingly strict EASA and FAA noise requirements for certification.