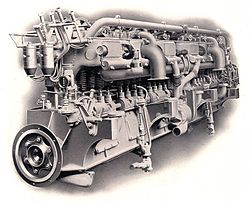 A straight-12 engine or inline-12 engine is a twelve-cylinder internal combustion engine with all twelve cylinders mounted in a straight line along the crankcase.

A straight-12 is a very long engine, and therefore straight-12 engines are extremely rare in automobiles, the first recorded being the Corona[1] made available in France in 1920. It displaced 7,238 cubic centimetres (441.7 cu in), but it is not known if any were sold. Packard also experimented with an automobile powered by an inline 12 in 1929.[2] The straight-12 has also been used for large military trucks.

Some Russian firms built straight-12s for use in ships in the 1960s and 1970s. MAN Diesel & Turbo 12K98ME and 12S90ME-C and the Wärtsilä-Sulzer RTA96-C are examples of contemporary marine engines in L-12-cylinder configuration. These are popular for propulsion in container ships.[3][4] Wärtsilä-Sulzer has even made the world's so far only L-14 configuration.[5]