A stratified charge engine describes a certain type of internal combustion engine, usually spark ignition (SI) engine that can be used in trucks, automobiles, portable and stationary equipment. The term "stratified charge" refers to the working fluids and fuel vapors entering the cylinder. Usually the fuel is injected into the cylinder or enters as a fuel rich vapor where a spark or other means are used to initiate ignition where the fuel rich zone interacts with the air to promote complete combustion. A stratified charge can allow for slightly higher compression ratios without "knock," and leaner air/fuel ratio than in conventional internal combustion engines.

In a homogeneous charge system, the air/fuel ratio is kept very close to stoichiometric, meaning it contains the exact amount of air necessary for complete combustion of the fuel. This gives stable combustion, but it places an upper limit on the engine's efficiency: any attempt to improve fuel economy by running a much leaner mixture (less fuel or more air) with a homogeneous charge results in slower combustion and a higher engine temperature; this impacts on power and emissions, notably increasing nitrogen oxides or NOx.

Direct fueling of petrol engines offers considerable advantages over port-fueling, a type of fuel injection in which the fuel injectors are placed in the intake ports, giving homogeneous charges. Powerful electronic management systems mean that there is no significant cost penalty. With the further impetus of tightening emissions legislation,[citation needed] about half of all 2016 MY North American light duty vehicles used direct injection.[1]

First, a higher mechanical compression ratio (or, with super-charged or turbo-charged engines, maximum combustion pressure) may be used for better thermodynamic efficiency. Since fuel is not present in the combustion chamber until virtually the point at which combustion is required to begin, there is no risk of pre-ignition or engine knock.

The engine may also run on a much leaner overall air/fuel ratio, using stratified charge, in which a small charge of a rich fuel mixture is ignited first and used to improve combustion of a larger charge of a lean fuel mixture.

Combustion can be problematic if a lean mixture is present at the spark plug. However, fueling a petrol engine directly allows more fuel to be directed towards the spark-plug than elsewhere in the combustion-chamber.[3] This results in a stratified charge: one in which the air/fuel ratio is not homogeneous throughout the combustion-chamber, but varies in a controlled (and potentially quite complex) way across the volume of the cylinder.

Charge stratification can also be achieved where there is no 'in cylinder' stratification: the inlet mixture can be so lean that it is unable to be ignited by the limited energy provided by a conventional spark plug. This exceptionally lean mixture can, however, be ignited by the use of a conventional mixture strength of 12-15:1, in the case of a petrol fuelled engine, being fed into a small combustion chamber adjacent to and connected to the main lean-mixture chamber. The large flame front from this burning mixture is sufficient to combust the charge. It can be seen from this method of charge stratification that the lean charge is 'burnt' and the engine utilising this form of stratification is no longer subject to ' knock' or uncontrolled combustion. The fuel being burnt in the lean charge is therefore not 'knock' or octane restricted. This type of stratification therefore can utilise a wide variety of fuels; the specific energy output being dependent only on the calorific value of the fuel.

A relatively rich air/fuel mixture is directed to the spark-plug using multi-hole injectors. This mixture is sparked, giving a strong, even and predictable flame-front. This in turn results in a high-quality combustion of the much weaker mixture elsewhere in the cylinder.

This comparison of 'burn' rates is a rather simplistic view. Although Petrol and Diesel engines appear similar in operation, the two types operate on entirely different principles. In earlier manufactured editions the external characteristics were obvious. Most petrol engines were carbureted, sucking the fuel/air mixture into the engine, while the diesel only sucked in air and the fuel was directly injected at high pressure into the cylinder. In the conventional four-stroke petrol engine the spark plug commences to ignite the mixture in the cylinder at up to forty degrees before top dead centre while the piston is still travelling up the bore. Within this movement of the piston up the bore, controlled combustion of the mixture takes place and the maximum pressure occurs just after top dead centre, with the pressure diminishing as the piston travels down the bore. i.e. the cylinder volume in relation to the cylinder pressure-time generation remains essentially constant over the combustion cycle. Diesel engine operation on the other hand inhales and compresses air only by the motion of the piston moving to top dead centre. At this point maximum cylinder pressure has been reached. The fuel is now injected into the cylinder and the fuel ' burn' or expansion is started at this point by the high temperature of the, now compressed, air. As the fuel burns it expands exerting pressure on the piston, which in turn develops torque at the crankshaft. It can be seen that the diesel engine is operating at constant pressure. As the gas expands the piston is also moving down the cylinder. By this process the piston and subsequently the crank experiences a greater torque, which is also exerted over a longer time interval than its petrol equivalent. 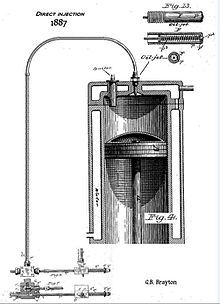 The principle of injecting fuel directly into the combustion chamber at the moment at which combustion is required to start was first invented by George Brayton in 1887, but it has been used to good effect in petrol engines for a long time. Brayton describes his invention as follows: "I have discovered that heavy oils can be mechanically converted into a finely-divided condition within a firing portion of the cylinder, or in a communicating firing chamber." Another part reads "I have for the first time, so far as my knowledge extends, regulated speed by variably controlling the direct discharge of liquid fuel into the combustion chamber or cylinder into a finely-divided condition highly favorable to immediate combustion". This was the first engine to use a lean burn system to regulate engine speed / output. In this manner the engine fired on every power stroke and speed / output was controlled solely by the quantity of fuel injected.

Harry Ricardo first began working with the idea of a lean burn "stratified charge" engine in the early 1900s. In the 1920s he made improvements on his earlier designs.

An early example of gasoline direct injection was the Hesselman engine invented by Swedish engineer Jonas Hesselman in 1925. Hesselman engines used the ultra lean burn principle and injected the fuel in the end of the compression stroke and then ignited it with a spark plug, it was often started on gasoline and then switched over to run on diesel or kerosene. The Texaco Controlled Combustion System (TCCS) was a multifuel system developed in the 1950s which closely resembled the Hesselman design. The TCCS was tested in UPS delivery vans and was found to have an overall increase in economy of about 35%.

Honda's CVCC engine, released in the early 1970s models of Civic, then Accord and City later in the decade, is a form of stratified charge engine that had wide market acceptance for considerable time. The CVCC system had conventional inlet and exhaust valves and a third, supplementary, inlet valve that charged an area around the spark plug. The spark plug and CVCC inlet were isolated from the main cylinder by a perforated metal plate. At ignition a series of flame fronts shot into the very lean main charge, through the perforations, ensuring complete ignition. In the Honda City Turbo such engines produced a high power-to-weight ratio at engine speeds of 7,000 rpm and above.

Jaguar Cars in the 1980s developed the Jaguar V12 engine, H.E. (so called High Efficiency) version, which fit in the Jaguar XJ12 and Jaguar XJS models and used a stratified charge design called the 'May Fireball' in order to reduce the engine's very heavy fuel consumption..

The Vespa ET2 scooter had a 50 cc two-stroke engine in which air was admitted through the transfer port and a rich fuel mixture was injected into the cylinder near the spark plug just before ignition. The injection system was purely mechanical, using a timed pumping cylinder and a non-return valve.

On its downward stroke it compresses the rich mixture to about 70 psi at which time the rising pressure raises a spring loaded poppet valve off its seat and the charge is squirted into the cylinder. There it is aimed at the spark plug area and ignited. The combustion pressure immediately shuts the spring-loaded poppet valve and from then on its (sic) just a "regular" stratified-charge ignition process with the flame front igniting those lean mixture areas in the cylinder.[4]

Mercedes Benz has been employing stratified charge engines with its Blue DIRECT system.

With the stratified-charge application, the 3.0L V-6 will continue to employ direct fuel injection, but the injectors have been redesigned to spray under higher pressure later in the intake stroke, just before compression, and the fuel is shaped to arrive in certain areas within the cylinder to optimize combustion. This strategy makes for an air-fuel mix within the chamber that is much leaner than with a conventional homogeneous-charge system that fills the chamber more uniformly before combustion.

Turbo fuel stratified injection (TFSI) is a trademark of the Volkswagen Group for a type of forced-aspiration ("turbo") engine where the fuel is pressure-injected straight into the combustion chamber in such a way as to create a stratified charge. FSI direct injection technology increases the torque and power of spark-ignition engines, makes them as much as 15 percent more economical and reduces exhaust emissions.[6]

Some advantages of TFSI engines: