Not to be confused with Public utility vehicle. 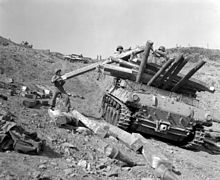 A utility vehicle is a vehicle, generally motorized, that is designed to carry out a specific task with more efficacy than a passenger vehicle. It sometimes refers to a truck with low sides.[1]

This type of vehicle is mainly used by military and also called as military utility vehicle. It mainly consists of vehicles like military tanks, trucks, etc.

Traditionally, these are vehicles similar to a station wagon but they are built on a light-truck chassis and equipped with four-wheel drive or all-wheel drive amongst other off-road hardware. Their primary purpose is to display superior off-road and towing capabilities, teamed with higher seating capacity.

These are larger vehicles which can tackle a wide range of applications. They typically allow easy conversion between multiple combinations of passenger and luggage capacity.

Station wagons based on a car chassis, but built to resemble sport utility vehicles. They have limited off-road capability but sportier on-road behavior than SUVs. May also be referred to as a "Sports Activity Vehicle", as is the case with BMW's X-range of vehicles.

Vehicles like the Kawasaki MULE in which a flat bed is added to an all terrain vehicle. Generally used as a maintenance vehicle.

A jeep is a type of light utility vehicle, originally used by the military, with four-wheel drive for travelling over rough terrain.[2]

Utility trucks, (known as pickup trucks in the US) are similar to Coupé utilities. The main difference being that they are either built specifically for purpose or based upon Sports utility vehicles rather than being produced by modifying existing passenger vehicles.

Main article: Side by Side (UTV)

The Side-by-side (SxS), also known as Utility Task Vehicle (UTV), is small four-wheel off-road vehicle. It has a side-by-side seating arrangement, and UTVs often have seat belts, roll-over protection and a storage box at the rear of the vehicle.

In 2017, the UTV category was added to the Rally Dakar.