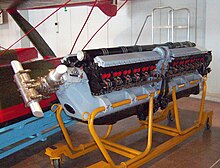 A V24 engine is a 24-cylinder piston engine where two banks of twelve cylinders are arranged in a V configuration around a common crankshaft. The majority of V24 engines, however, have been "dual V12" engines where two separate V12 engines are placed in line with each other.

This V24 aero engine was built in the early 1930s to power the Macchi M.C.72 aeroplane, which was intended to compete in the 1931 Schneider Trophy air races. This engine was in reality formed by mounting two Fiat AS.5 V12 engines one behind the other, with the front engine powering the rear propeller and the rear engine powering the front propeller.[1] The combined displacement was more than 50 L (3,051 cu in) and the combined power output was approximately 2,900 hp (2,160 kW).[2]

Mechanical problems prevented the aeroplane from competing in the Schneider Trophy, however the Macchi M.C.72 achieved an average top speed of 709.2 km/h (440.7 mph) on 23 October 1934. This set the record for a piston-powered seaplane, a record which stands to this day.[3]