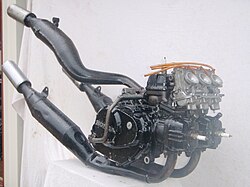 The V3 engine is a V engine with two cylinders in one bank and one cylinder in the other bank. It is a rare configuration, which has been mostly used in two-stroke engines for motorcycles competing in Grand Prix motorcycle racing.

A related layout was the W3 engine, although this placed all three cylinders in the same plane, but none of them in the same bank. This was used for the 1905–1915 four-stroke Anzani engine, which was used in motorcycle and aircraft applications.