Volumetric efficiency (VE) in internal combustion engine engineering is defined as the ratio of the mass density of the air-fuel mixture drawn into the cylinder at atmospheric pressure (during the intake stroke) to the mass density of the same volume of air in the intake manifold. The term is also used in other engineering contexts, such as hydraulic pumps and electronic components.[citation needed]

There are several ways to improve volumetric efficiency, but system-wide approaches are used to realize its full potential.

Many high performance cars use carefully arranged air intakes and tuned exhaust systems that use pressure waves to push air into and out of the cylinders, making use of the resonance of the system. Two-stroke engines are very sensitive to this concept and can use expansion chambers that return the escaping air-fuel mixture back to the cylinder. A more modern technique for four-stroke engines, variable valve timing, attempts to address changes in volumetric efficiency with changes in speed of the engine: at higher speeds the engine needs the valves open for a greater percentage of the cycle time to move the charge in and out of the engine.

Volumetric efficiencies above 100% can be reached by using forced induction such as supercharging or turbocharging. With proper tuning, volumetric efficiencies above 100% can also be reached by naturally aspirated engines. The limit for naturally aspirated engines is about 130%;[2] these engines are typically of a DOHC layout with four valves per cylinder. This process is called inertial supercharging and uses the resonance of the intake manifold and the mass of the air to achieve pressures greater than atmospheric at the intake valve. With proper tuning (and dependent on the need for sound level control), VE's of up to 130% have been reported in various experimental studies.[3]

More "radical" solutions include the sleeve valve design, in which the valves are replaced outright with a rotating sleeve around the piston, or alternately a rotating sleeve under the cylinder head. In this system the ports can be as large as necessary, up to that of the entire cylinder wall. However, there is a practical upper limit due to the strength of the sleeve, at larger sizes the pressure inside the cylinder can "pop" the sleeve if the port is too large. 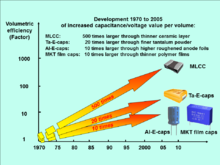 In electronics, volumetric efficiency quantifies the performance of some electronic function per unit volume, usually in as small a space as possible. This is desirable since advanced designs need to cram increasing functionality into smaller packages, for example, maximizing the energy stored in a battery powering a cellphone. Besides energy storage in batteries, the concept of volumetric efficiency appears in design and application of capacitors, where the "CV product" is a figure of merit calculated by multiplying the capacitance (C) by the maximum voltage rating (V), divided by the volume. The concept of volumetric efficiency can be applied to any measurable electronic characteristic, including resistance, capacitance, inductance, voltage, current, energy storage, etc.