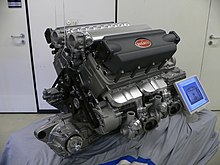 A W16 engine is a sixteen cylinder piston engine with four banks of four cylinders in a W configuration.

W16 engines are rarely produced, with the notable exception of the Volkswagen Group 8.0 WR16 engine that has been used since 2005 in the Bugatti Veyron, Bugatti Chiron and their related models.

Volkswagen Group is the only manufacturer to currently produce a W16 engine, which has been used in the Bugatti Veyron and Bugatti Chiron since 2005. This engine has a displacement of 8.0 L (488 cu in) and four turbochargers. It is effectively two narrow-angle VR8 engines (based on the VR6 design) mated at an included angle of 90 degrees on a common crankshaft.[1] 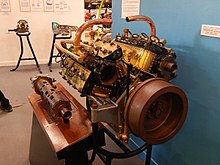 In 1916, a rotary valve W16 engine was built in France by Gaston Mougeotte.[citation needed]