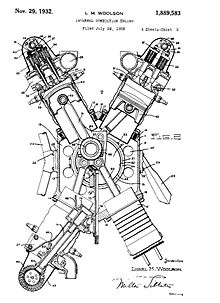 An X engine is a piston engine with four banks of cylinders around a common crankshaft, such that the cylinders form an "X" shape when viewed from front-on.

The advantage of an X engine is that it is shorter than a V engine of the same number of cylinders,[2] however the drawbacks are higher weight and complexity as compared to a radial engine. Therefore the configuration has been rarely used.

Several of the X engine designs were based on combining two V engines.

Other prototype X engines include a 1920s Ford X-8 automotive engine, which was investigated during the development process of the Ford Flathead V8 engine.[5][6] During the 1960s, Honda is said to have experimented with an X-32 engine configuration for their Formula One racing efforts, but abandoned the design as being too complex and unreliable.[citation needed] From 2006-2010, the Revetec X4v1 and Revetec x4v2 X-4 experimental petrol engines were developed by an engine research company,[7][8] followed in 2013 by the Revetec X4-D1 experimental diesel engine.[9]