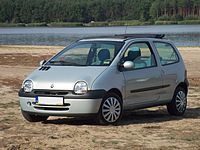 The A-segment is a category in the passenger car classification system defined by the European Commission. It is used for city cars, the smallest category of passenger cars defined.[1] In Europe the term city car is also used.[2][3]

The popularity of the segment increased in the late 1950s, due to the introduction of the Fiat 500 and the BMC Mini. As of 2017, A-segment sales account for 8% market share in Europe.[4][failed verification]

In the United States, A-segment cars represented 0.8% of the market and the segment was dominated by the Mini and Fiat 500.[5]

As of 2019 the top five selling A-segment cars in Europe were the Fiat Panda, Fiat 500, Toyota Aygo, Renault Twingo and Volkswagen Up!.[9]