Warning: call_user_func_array() expects parameter 1 to be a valid callback, cannot access private method Astra_Addon_Background_Updater::needs_db_update() in /home/content/73/11784573/html/prewarbeta/wp-content/plugins/wp-views/vendor/toolset/toolset-theme-settings/compatibility-modules/controllers/toolset-theme-integration-settings-front-end-controller.php on line 363
 Vehicle list – Eligible T – The Pre-war M.G. Register
Skip to content
This article is about a control panel placed in the front of the car. For other uses, see Dashboard (disambiguation). 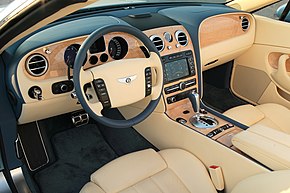 The dashboard of a Bentley Continental GTC car

A dashboard (also called dash, instrument panel (IP), or fascia) is a control panel usually located directly ahead of a vehicle's driver, displaying instrumentation and controls for the vehicle's operation. 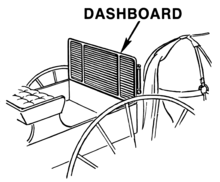 Originally, the word dashboard applied to a barrier of wood or leather fixed at the front of a horse-drawn carriage or sleigh to protect the driver from mud or other debris "dashed up" (thrown up) by the horses' hooves.[1] Commonly these boards did not perform any additional function other than providing a convenient handhold for ascending into the driver's seat, or a small clip with which to secure the reins when not in use.

When the first "horseless carriages" were constructed in the late 19th century, with engines mounted beneath the driver such as the Daimler Stahlradwagen, the simple dashboard was retained to protect occupants from debris thrown up by the cars' front wheels. However, as car design evolved to position the motor in front of the driver, the dashboard became a panel that protected vehicle occupants from the heat and oil of the engine. With gradually increasing mechanical complexity, this panel formed a convenient location for the placement of gauges and minor controls, and from this evolved the modern instrument panel, although retaining its archaic common name.

The first mass-produced automobile, the Oldsmobile Curved Dash, got its name from its dashboard, which was curved like that of a sleigh.[2]

Where the dashboard originally included an array of simple controls (e.g., the steering wheel) and instrumentation to show speed, fuel level and oil pressure, the modern dashboard may accommodate a broad array of gauges, and controls as well as information, climate control and entertainment systems.

In 1937, Chrysler, Dodge, DeSoto, and Plymouth cars came with a safety dashboard that was flat, raised above knee height, and had all the controls mounted flush.[4]

Padded dashboards were advocated in the 1930s by car safety pioneer Claire L. Straith.[5] In 1948, the Tucker became the first car with a padded dashboard.[6]

One of the safety enhancements of the 1970s was the widespread adoption of padded dashboards. The padding is commonly polyurethane foam, while the surface is commonly either polyvinyl chloride (PVC) or leather in the case of luxury models.

In the early and mid-1990s, airbags became a standard feature of steering wheels and dashboards. 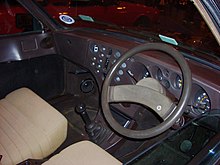 In the 1940s through the 1960s, American car manufacturers and their imitators designed unusually-shaped instruments on a dashboard laden with chrome and transparent plastic, which could be less readable, but was often thought to be more stylish. Sunlight could cause a bright glare on the chrome, particularly for a convertible. On North American vehicles in particular, this trend lingered on as late as the mid-1980s, which still featured dashboards with wood and fake chrome embellishment along with square instruments long after European and Japanese manufacturers had long embraced a plainer, more functional and austere approach for dashboard and instrument panel design.

With the advent of the VFD, LED and LCD in consumer electronics, some manufacturers used instruments with digital readouts to make their cars appear more up to date, but this has faded from practice. Some cars use a head-up display to project the speed of the car onto the windscreen in imitation of fighter aircraft, but in a far less complex display.

In recent years, spurred on by the growing aftermarket use of dash kits, many automakers have taken the initiative to add more stylistic elements to their dashboards. One prominent example of this is the Chevrolet Sonic which offers both exterior (e.g., a custom graphics package) and interior cosmetic upgrades.[7] In addition to OEM dashboard trim and upgrades a number of companies offer domed polyurethane or vinyl applique dash trim accent kits or "dash kits."

Manufacturers such as BMW, Honda, Toyota and Mercedes-Benz have included fuel-economy gauges in some instrument clusters, showing fuel mileage in real time, which was limited mainly to luxury vehicles and later, hybrids. Following a focus on increasing fuel economy in the late 2000s along with increased technology, most vehicles in the 2010s now come with either real-time or average mileage readouts on their dashboards. The ammeter was the gauge of choice for monitoring the state of the charging system until the 1970s. Later it was replaced by the voltmeter. Today most family vehicles have warning lights instead of voltmeters or oil pressure gauges in their dashboard instrument clusters, though sports cars often have proper gauges for performance purposes and driver appeasement along with larger trucks, mainly to monitor system function during heavy usage such as towing or off-road usage.