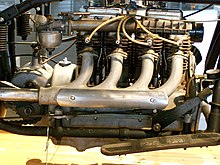 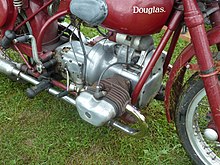 An X engine is essentially two V engines joined by a common crankshaft. These were commonly used in aircraft during World War II. A majority of these were existing V-12 engines converted into an X-24 configuration.

A four valves per cylinder design usually has two valves for intake and two for exhaust, which requires two camshafts per cylinder bank. If there are two camshafts in the cylinder head, the cams can sometimes bear directly on cam followers on the valve stems (tappets). The cam followers aid in noise reduction, dampened vibration, shock absorption and the carrying of axial load.[3][4] This latter arrangement is the most inertia free, allows the most unimpeded gas flows in the engine and is the usual arrangement for high performance automobile engines. It also permits the spark plug to be located in the center of the cylinder head, which promotes better combustion characteristics. Beyond a certain number of valves, the effective area covered decreases, so four is the common-most number. Odd numbers of valves necessarily means the intake or exhaust side must have one valve more. In practice this is invariably the intake valves - even in even-numbered head designs, inlet valves are often larger in size than exhaust.