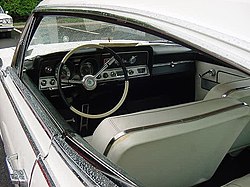 Pillarless hardtop (often referred to as simply "hardtop") is a body style of cars without a B-pillar, which are often styled to give the appearance of a convertible design.

The pillarless hardtop (often abbreviated to "hardtop") is a hardtop with no B-pillar which is often styled to look like a convertible.[1][2] If window frames are present, they are designed to retract with the glass when lowered. This creates an impression of uninterrupted glass along the side of the car.[3]

A pillarless hardtop is inherently less rigid than a pillared body, requiring extra underbody strength to prevent shake. Production hardtops commonly share the frame or reinforced body structure of the contemporary convertible model, which is already reinforced to compensate for the lack of a fixed roof.

Hardtops tend to be more expensive and collectible than sedan models of the same vehicle.[4]

The hardtop began to disappear along with convertibles in the mid-1970s, partly out of a concern that U.S. federal safety regulations would be difficult for pillarless models to pass. The ascendancy of monocoque construction also made the pillarless design less practical. Some models adopted modified roof styling, placing the B pillars behind tinted side window glass and painting or molding the outer side of each pillar in black to make them less visible, creating a hardtop look without actually omitting the pillar. Some mid- to late-1970s models continued their previous two-door hardtop bodies, but with fixed rear windows or a variety of vinyl roof and opera window treatments.

By the end of the 1990s, almost all hardtop designs disappeared as structural integrity standards continued to increase.

California Top on a 1926 Studebaker Phaeton

Early automobiles had no roof or sides, however by 1900 several cars were offered with fabric roofs and primitive folding tops.[5][6] However, cars with fully closed bodies (i.e. with a rigid roof and sides) grew in popularity and soon became the norm.[6]

In 1915–1918, the first pillarless hardtop cars were produced, then called "convertible cars" (or "touring sedans" or "Springfields").[7] The Springfield design featured folding upper frames on the doors and the rear glass frames are removable and stored under or behind the seats.[8] In the late teens, Cadillac offered a sedan with removable "B" pillars.

Another form of early pillarless hardtop is the "California top", originating in Los Angeles and most popular from 1917—1927.[7][9] These were designed to replace the folding roofs of touring cars, in order to enclose the sides of the car for better weather protection.[10] One objective of these aftermarket tops was to bring the cost of the closed car nearer to the prices of corresponding open cars.[11] Automobile dealers were encouraged to equip an open car with a California top to demonstrate that they were "cool and clean in summer, and warm and dry in winter."[12] The hard tops were frequently equipped with celluloid windows that retracted like a roller blind for open sided motoring offering a low-cost compromise between an open and closed car.[13]

There were a variety of hardtop-like body styles dating back to 1916.[14] Chrysler Corporation built seven pillarless Town and Country hardtop coupes as concept vehicles in 1946, and even included the body style in its advertising that year.[15]

The Kaiser-Frazer 1949 Virginian was an early example of a four-door hardtop albeit with a removable thin, chrome- and-glass 'B' pillar held on by five screws.[16] The car was designed to have a convertible look and padded nylon or cotton was applied over the roof to contribute to the soft-top appearance.[17]

Two-door hardtops became popular with consumers in the 1950s while the two-door sedan body design fell out of favor among buyers.[18]

In 1955, General Motors introduced the first four-door hardtops.[19][20] Following the pattern established by the two-door variants, GM utilized the same special sub-designations for the pillarless four-door body types within all their brands in North America. The term de Ville was used for Cadillac, Riviera was used for Buick, Holiday was used for Oldsmobile, Catalina was used for Pontiac, and Bel Air was used for Chevrolet.[21]

Other manufacturers also designated special names for their pillarless models. Ford called them Victoria, Chrysler used Newports, Packard named them Mayfair, and Hudson's were Hollywoods. Nash used the Country Club moniker while pillarless Studebakers were Starliners, a name that was later used by Ford for its Galaxie hardtop.

By 1956 every major U.S. automaker offered two- and four-door hardtops in a particular model lineup. General Motors restyled their new models and now offered four-door hardtops from every division and in nearly every series except the lowest priced lines.[22]

In 1956, the first four-door hardtop station wagons were introduced by Rambler[23] and American Motors Corporation.[24] The following year, the Mercury Commuter hardtop wagons became available in both two- and four-door body styles.

Throughout the 1960s the two-door pillarless hardtop was by far the most popular body style in most lines where such a model was offered. Even on family-type vehicles like the Chevrolet Impala, the two-door hardtop regularly outsold four-door sedans. Some car lines (such as the 1957-64 Cadillac and 1965-69 Corvair) only offered pillarless models with no sedans at all. So prevalent were true hardtops that Popular Mechanics had to describe that the new full-sized 1967 Oldsmobile Delmont models also included a "pillar" sedan.[25]

The U.S. industry's last pillarless two-door and four-door hardtops were in the 1978 Chrysler Newport and New Yorker lines.[26] Since then, no U.S. manufacturer has offered a true hardtop in regular production.

In July 1965 Toyota introduced Japan's first 2-door hardtop coupe, and August 1967 they installed the 1,587 cc DOHC 9R engine in the Toyota 1600GT. This followed with several manufacturers offering the popular bodystyle as a luxury car appearance. During the 1970s, Toyota produced the Toyota Crown in a pillarless two-door hardtop version.[27] Nissan followed suit with the Nissan Cedric and Nissan Gloria in 4-door sedan and 2-door hardtop body styles,[28] with the latter "rendered as a premium quality personal car."[29] Subaru introduced a new compact coupe as a genuine two-door hardtop with the Subaru Leone in 1971.[30] The pillarless hardtop models were more expensive and luxurious than the sedan versions.

Various European manufacturers have produced hardtops without B-pillars (usually coupes), however they are rarely marketed as pillarless hardtops. Examples include the current Bentley Continental GT, the 2008 Bentley Brooklands, the 2001-2003 Renault Avantime, the Rolls-Royce Wraith, and the 2012-current Ford B-Max. The 1958-1964 Facel Vega Excellence is one of few four-door hardtops produced in Europe.

A New Mini two-door sedan has been marketed as a hardtop in the United States, although it does have a B-pillar, which is disguised by being painted black.[31] 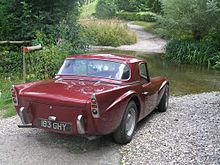 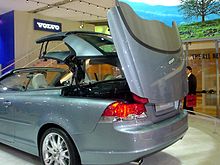