American science magazine
This article is about the magazine. For the short story by Raymond Carver, see Little Things (short story). For the album by Piano Magic, see Popular Mechanics (album).

It was founded in 1902 by Henry Haven Windsor, who was the editor and—as owner of the Popular Mechanics Company—the publisher. For decades, the tagline of the monthly magazine was "Written so you can understand it." In 1958, PM was purchased by the Hearst Corporation, now Hearst Communications.[4]

In 2013, the US edition changed from twelve to ten issues per year, and in 2014 the tagline was changed to "How your world works."[5] The magazine added a podcast in recent years, including regular features Most Useful Podcast Ever and How Your World Works.[6] 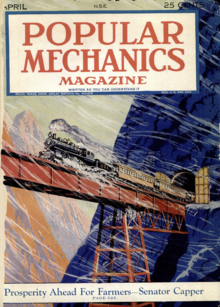 Popular Mechanics was founded in Chicago by Henry Haven Windsor, with the first issue dated January 11, 1902. His concept was that it would explain "the way the world works" in plain language, with photos and illustrations to aid comprehension.[4] For decades, its tagline was "Written so you can understand it."[7] The magazine was a weekly until September 1902, when it became a monthly. The Popular Mechanics Company was owned by the Windsor family and printed in Chicago until the Hearst Corporation purchased the magazine in 1958. In 1962, the editorial offices moved to New York City.[8]

From the first issue, the magazine featured a large illustration of a technological subject, a look that evolved into the magazine's characteristic full-page, full-color illustration and a small 6.5" x 9.5" trim size beginning with the July, 1911 issue. It maintained the small format until 1975 when it switched the larger standard trim size. Popular Science adopted full-color cover illustrations in 1915, and the look was widely imitated by later technology magazines.[9]

In June 2020, Popular Mechanics faced widespread criticism for an article that provided detailed instructions on how to vandalize monuments.[13]

*Note that in general, dates are the inclusive issues for which an editor was responsible. For decades, the lead time to go from submission to print was three months, so some of the dates might not correspond exactly with employment dates. As the Popular Mechanics web site has become more dominant and the importance of print issues has declined, editorial changes have more immediate impact.