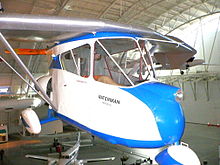 The Waterman Arrowbile at the Smithsonian

In the U.S., the Defense Advanced Research Projects Agency (DARPA) has shown an interest in the concept with a $65 million program called Transformer to develop a four-person roadable aircraft by 2015.[1] The vehicle is required to take off vertically, and have a 280-mile (450 km) range. AAI Corporation and Lockheed Martin were awarded contracts in late 2010 for the Phase 1 program.[2] Lockheed Martin's design was selected to continue to Phase 3.[3]

Glenn Curtiss, the chief rival of the Wright brothers, was the first to design a roadable aircraft. His large, three-wing Curtiss Autoplane was able to hop, but not fly.[4]

In 1935, inventor Constantinos Vlachos built a prototype of a 'tri-phibian' vehicle that caught fire after the engine exploded, while Vlachos was demonstrating it in Washington, D.C. Vlachos' prototype is most notable for a newsreel that captured the incident,[5] which left him in hospital for several months.[6][7]

The Autogiro Company of America AC-35 was an early attempt at a roadable aircraft. On March 26, 1936 the AC-35 was flown by test pilot James G. Ray with counter-rotating propellers. These were later replaced with a single conventional propeller arrangement. On October 2, 1936, Ray landed the AC-35 in a downtown park in Washington, D.C. where it was displayed. On October 26, 1936, the aircraft was converted to roadable configuration.[8] Ray drove it to the main entrance of the Commerce Building, where it was accepted by John H. Geisse, chief of the Aeronautics Branch. Although it was successfully tested, it did not enter production.

The first roadable fixedwing aircraft actually to fly was built by Waldo Waterman. Waterman was associated with Curtiss while Curtiss was pioneering amphibious aircraft at North Island on San Diego Bay in the 1910s. On March 21, 1937, Waterman's Arrowbile first took to the air.[9] The Arrowbile was a development of Waterman's tailless aircraft, the Whatsit.[10] It had a wingspan of 38 feet (12 m) and a length of 20 feet 6 inches (6.25 m). On the ground and in the air it was powered by a Studebaker engine. It could fly at 112 mph (180 km/h) and drive at 56 mph (90 km/h).

In 1942, the British army built the Hafner Rotabuggy, an experimental roadable autogyro that was developed with the intention of producing a way of air-dropping off-road vehicles. Although initial tests showed that the Rotabuggy was prone to severe vibration at speeds greater than 45 miles per hour (72 km/h), with improvements the Rotabuggy achieved a flight speed of 70 mph (113 km/h).

However, the introduction of gliders that could carry vehicles (such as the Waco Hadrian and Airspeed Horsa) made the Rotabuggy superfluous and further development was cancelled.[11]

Although several designs (such as the ConVairCar) have flown, none have enjoyed commercial success, and those that have flown are not widely known about by the general public. The most successful example, in that several were made and one is still flying, is the 1949 Taylor Aerocar.

One notable design was Henry Smolinski's Mizar, made by mating the rear end of a Cessna Skymaster with a Ford Pinto, but it disintegrated during test flights killing Smolinski and the pilot.

At the 2014 Pioneers Festival at Wien (Austria) AeroMobil presented their version 3.0 of their flying car. The prototype was conceived as a vehicle that can be converted from an automobile to an aircraft. The version 2.5 proof-of-concept took 20 years to develop, and first flew in 2013. CEO Juraj Vaculik said that the company planned to move flying cars to market: "the plan is that in 2017 we’ll be able to announce… the first flying roadster."[12]

Most roadable aircraft fall into one of two styles: 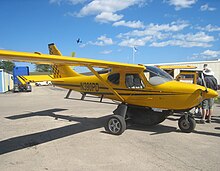 A number of companies are developing vehicles, although few have demonstrated a full-sized vehicle capable of free flight.

In April 2012, the was established to be the "central resource center for information and communication between the flying car industry, news networks, governments, and those seeking further information worldwide".[44] Because flying cars need practical regulations that are mostly dealt with on a regional level, several regional associations were established as well, with the (EFCA) representing these national member associations on a pan-European level (51 independent countries, including the European Union Member States, the Accession Candidates and Russia, Switzerland, Turkey, Ukraine).[45] The associations are also organizing racing competitions for roadable aircraft in Europe, the European Roadable Aircraft Prix (ERAP), mainly to increase awareness about this type of aircraft among a broader audience.[46]