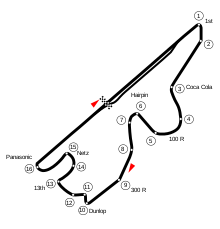 Track map of the Fuji Speedway

No. 7 Toyota TS050 Hybrid which won the race

The 2018 6 Hours of Fuji was an endurance sports car racing event held at the Fuji Speedway in Oyama, Japan on the 12–14 October 2018. Fuji served as the fourth round of the 2018-19 FIA World Endurance Championship, and was the seventh running of the event as part of the championship. The race was won by the #7 Toyota TS050 Hybrid.

^1 - All of José María López's lap times were deleted for speeding in the pit lane, resulting in only one driver of the No. 7 Toyota Gazoo Racing being classified as setting a lap time

The minimum number of laps for classification (70% of the overall winning car's race distance) was 161 laps. Class winners in bold.[2]