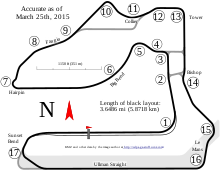 The provisional calendar for the 2022 FIA World Endurance Championship released in August 2021. It saw a few changes, with the return of the Sebring and Fuji races, whilst the Portimao and second Bahrain races were dropped.[1]

Pole position winners in each class are marked in bold.

The race was stopped twice during the course of the event with red flags. The first stoppage was after the crash of the #7 Toyota Gazoo Racing entry, which required extensive time for car recovery and barrier repair. The second stoppage occurred in the final hour due to lightning strikes and heavy rain showers in the area. The race was ultimately ended early due to the weather conditions.

The minimum number of laps for classification (70% of the overall winning car's distance) was 136 laps. Class winners are in bold and