Anniviers is a municipality in the district of Sierre in the canton of Valais in Switzerland. It was formed through the merger of six municipalities in Val d'Anniviers: Ayer, Chandolin, Grimentz, Saint-Jean, Saint-Luc and Vissoie. The merger became effective 1 January 2009,[3] creating the third largest municipality of Switzerland by area.

Human settlement dates from the Bronze Age and Iron Age. The region was later occupied by Gaulish tribes, who were conquered by the Roman Empire during the first century. Under Rome the valley was incorporated into the province of Helvetia and became known as Annivesium.

The present inhabitants of Anniviers are claimed to be descendants of Huns or a related people, who migrated to Europe from Central Asia, during or after the fall of the Western Roman Empire. An extinct and unrecorded language formerly spoken in the area is reported to have had similarities to Hungarian.[4] The inhabitants of Val d'Anniviers generally became Christian much later than their neighbours; the Swiss travel writer Marc-Théodore Bourrit, in Description des Alpes Pennines et Rhetiennes (1781) writes of how the Bishopric of Sion struggled to convert the people of the valley, who long adhered to a pagan religion. A century later, the Hungarian cleric and historian Mihály Horváth says of the inhabitants: "They say they are the descendants of the old Huns. The majority of them have light-blue eyes or grayish green eyes, blonde or brown hair, with large and bony forehead and a slight yoke-bone. They have a common nose, broad chin, prominent shoulders and neck, and they are in general low-statured."[5] Other cultural features including folk art, cuisine and burial rituals are also said to support this link.[6] There are two main theories regarding the inhabitants' connection to the Huns:

The valley was known as Annivesium until 1052. The Bishop of Sion owned the valley between 1116 and 1138 and donated it to the chapter. In the year 1193, the area became a demesne of the Anniviers family, then by Raron (1381). The property was returned to the bishopric in 1798.

While the valley's first cart path was cleared in about 1300, a wagon road was not built until 1854 for the transport of nickel and cobalt ores. The paved road dates from 1955; it was constructed to allow transportation of materials needed to build the Dam Moiry.

The number of parishes increased from two in 1805 to five in 1932. By 1905 there were six municipalities: Ayer, Chandolin, Saint-Luc, Saint-Jean, Grimentz and Vissoie. 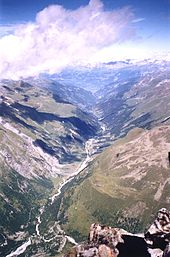 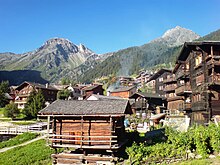 The Ilôt Bosquet and Chlasche in Grimentz is listed as a Swiss heritage site of national significance. The villages of Ayer, Grimentz, Saint-Jean, and Vissoie along with the hamlet of Pinsec are all part of the Inventory of Swiss Heritage Sites.[17]

The village of Vissoie is home to the Bibliothèque d'Anniviers library. The library has (as of 2008) 7,002 books or other media, and loaned out 5,395 items in the same year. It was open a total of 167 days with average of 25 hours per week during that year.[19]

Anniviers is a high tourism region. Several hiking trails and diverse sports installations welcome visitors in summer. In winter, three ski areas are available: Grimentz, Saint-Luc - Chandolin and Zinal. Vercorin is also nearby, but is technically not in the municipality.

Every year, Anniviers is the terminus of the Sierre-Zinal and the Grand Raid Cristalp races.

A speciality wine of the valley is the Vin du Glacier.