Appendix J Touring Cars was an Australian motor racing category for modified, production based sedans. It was the premier form of Touring car racing in Australia from 1960 to 1964. 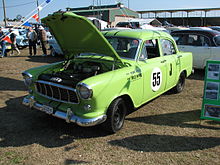 The category was introduced by the Confederation of Australian Motor Sport to take effect from January 1960. Prior to the introduction of Appendix J, there had been no national regulations for touring car racing in Australia with individual race promoters applying differing rules regarding eligibility and modification of the cars being raced.[1] Under Appendix J, eligibility was restricted to closed cars with seating for four persons and at least one hundred examples of the model had to have been produced.[2] Bodywork and interior trim had to remain virtually standard; however, engines and suspensions could be modified to improve performance and handling. Modifications were permitted in the areas of carburettors, valves, pistons, camshafts, inlet systems, exhaust systems, springs and shock absorbers.[3] Cars competed in numerous classes based on engine capacity with the regulations allowing an increase in capacity up to the limit of the relevant class.[2] Many highly modified cars which were no longer eligible to compete as Touring Cars found a home in another new CAMS category, Appendix K.[4] This was ostensibly for GT cars but in reality allowed virtually any form of closed vehicle to participate

In 1981 CAMS introduced the Group N Touring Cars category which was intended to recreate the style of racing which had existed under the Appendix J rules.[3] Originally Group N was restricted to cars manufactured before January 1965; however, this was later extended to permit models produced up to the end of 1972.[6]