The Audi R10 TDI, usually abbreviated to R10, is a diesel-powered racing car from the German car manufacturer Audi. The car dominated Le Mans, winning each year from its 2006 introduction until it was replaced by the R15 in 2009. It was designed and constructed for sports car racing in the Le Mans Prototype LMP1 class of the 24 Hours of Le Mans, and other similar endurance races. The car was unveiled December 13, 2005 at 12:00 CET,[3] and went on to win both its maiden race at the 2006 12 Hours of Sebring in March, and the June 2006 24 Hours of Le Mans.

It was the first diesel to win either of those events. At $15 million a year it was the most ambitious and most expensive project ever undertaken by Audi Sport.[4]

The Audi R10 TDI race car was built to supersede the Audi R8 racer, a proven model which had won five times at Le Mans since 2000 and earned a reputation as one of the most successful racing cars of all time. In later years the Automobile Club de l'Ouest (ACO), which sets the rules for racing in the Le Mans 24 Hours, had reduced the restrictor size on the engine, and stipulated the R8 carry ballast, to make the races more competitive. In response to the new level of competition, the development of a successor was necessary.

Though it does show a strong resemblance to the previous model, it is a new design. The aerodynamics package is in compliance with the new regulations. A second rollover hoop is added, and the wheelbase is lengthened to accept the new, longer V12 TDI TDI engine. The design and aerodynamics were developed by Audi, utilising the Fondtech wind tunnel. The monocoque is built by Audi 90% and Dallara 10%, as well with various suppliers manufacturing all the components and subassemblies. The cars are then assembled by Audi at Ingolstadt.[5]

At the beginning of the 2006 season, homologation rules for Le Mans Prototypes (LMP) cars were changed, for the LMP1 class, an increase in minimum weight from 900 kg to 925 kg was mandated. While officially this was to allow closed top prototypes to run with air-conditioning (as this would have added weight over open top cars), some have speculated that this was done at the behest of Audi to allow the R10 to be competitive.[6] 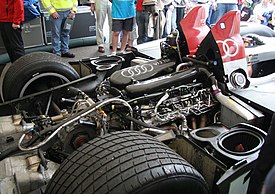 Unlike most racing cars competing in the LMP1 series, the R10 TDI is powered by a diesel engine, with two parallel turbochargers and utilizes the Turbocharged Direct Injection (TDI) technology. The engine block has a displacement of 5.5L in V12 configuration made of aluminium, employing common rail direct fuel injection technology. The turbochargers are supplied by Garrett AiResearch, with 39.9 mm (1.57 in) restrictor plates mounted in front of the intake.

Even with a larger-than-necessary restrictor plate, the car is rumoured to produce 700 hp (522 kW; 710 PS) in qualification, limited by the fuel combustion quality. This output cannot be maintained in races because it may cause a clogged diesel particulate filter. The peak pressure in the cylinder is probably around 200 bar, compared with 85 bar for an atmospheric petrol engine.[11]

Audi's decision to use a diesel engine emphasizes the commercial success of Turbocharged Direct Injection (TDI) turbodiesel engine (and its competitors) on Europe's roads. Diesels have been successfully used in other forms of racing as well, as their broad power band and fuel economy can prove advantageous, while in turn, the higher weight and lower rotational speed of the engine requiring new power transmissions are the disadvantages. The rules had to accommodate the need for a high capacity engine with a turbocharger and high boost, whereas both possibilities are no longer allowed for gasoline engines, as these had developed over 1,000 hp (746 kW; 1,014 PS) in several race series of the past.

It is not, however, the first diesel to be raced at Le Mans. The first diesel-engined car to qualify and race in the 24-hour event was a French entry in 1949, the first race held after the Second World War. The car was the Delettrez Diesel entered by brothers Jean and Jacques Delettrez, and was a 4395 cc 6-cylinder. It did not finish, running out of fuel about half way into the race.

Delettrez entered again in 1950, as did another diesel car, the MAP. Again, both cars did not finish due to engine problems, a cooling system leak in the case of the MAP. The MAP was interesting in that it was the first mid-engined car to race at Le Mans; the engine was located immediately behind the driver, and was a four-cylinder opposed piston two-stroke with rocking levers connected to a single crank, similar to the later Commer TS3 engine.[12]

In 2004, a Lola equipped with a Caterpillar re-badged V10 TDI ran for a few hours before breaking its clutch. Peugeot competed with its new diesel effort in 2007 in its 908 HDi FAP race car.

On 18 March 2006, the #2 Audi R10 won the 54th annual 12 Hours of Sebring after earning pole position by setting a qualifying record. The #1 car did not finish due to an overheating problem. On the day after the Sebring victory an R10 flipped over during testing while running through Turn One. However the R10 would not complete the most of the season. The Audi R8, completed most of the season with the R10 returning to race in the different Le Mans Races (Le Mans 24 Hrs, Petit Le Mans etc.)

Due to the sheer Audi dominance, the IMSA instantly made changes to the rules in the season. The Audi was not pegged back but competitors were helped to push their pace up to the Audi level. All LMP1 petrols were to be run at 860 kg and had their fuel tank increased to 95 liters. Dyson, Zytek, Creation and Porsche all have outqualified the Audi at one point during the season, but Audi were able to overcome the restriction deficit to take every win.

On 30 September 2006, the #2 Audi R10 won the 9th annual Petit Le Mans endurance race at Road Atlanta in Georgia. The win was seventh in a row for Audi in Petit Le Mans, but first for the R10 model. The #1 car was not running at the finish due to late race collision with another car resulting in damaged front suspension. #1 car was still classified in seventh place overall.

On 17 March 2007, the #2 Audi R10 won the 55th annual 12 Hours of Sebring. The #1 car finished 2nd in its class (LMP1) and 4th overall.[13] The R10 remained undefeated in American Le Mans Series competition until April 14, 2007, at the Long Beach Grand Prix; where it finished seventh overall to the Porsche RS Spyders of Penske and Dyson Racing. The car still won the LMP1 class.

IMSA had made changes to the category again. Under pressure from Audi and the ACO, LMP1 cars were now meant to have at least a 1.5% performance advantage over LMP2. The ACO reserves the right to make changes to specific cars if this was not happening. Throughout the season, the Penske Porsche RS Spyder won 8 overall victories against the Audi R10 which only won 4. The ALMS track nature suited the lighter and more nimble P2 cars more, which was evident as Audi loses time in the corners to the Porsche. At Petit Le Mans, Capello was able to use his speed advantage to overtake Dumas in the last half an hour. McNish and Capello won by 0.9 seconds. At Laguna Seca they won over the #7 Porsche by 0.4 seconds

It is undefeated at the 24 hours of Le Mans, having successfully defended its 2006 victory. On June 17, 2007, the #1 R10 finished first overall, overcoming the loss of two of the three team cars and defeating a new challenge from the Peugeot 908 HDi FAP diesels. The #3 Audi was put out of the race by driver error, crashing into a wall, whereas the #2 car suffered a wheel failure at approximately 300 km/h (186 mph) and collided with a barrier. Video pictures showed the car being dropped prematurely during a prior pit stop with the wheel in question not being properly attached, but Audi's official statement is that the incident was not the fault of the pitcrew, as the car had been on track for over 50 minutes since its tires were last changed. At Le Mans it was obvious that the R10 was faster than the Peugeot 908 on the straights and much more stable in the corners.

For the 2008 season, Audi entered the Le Mans Series for the first time. Joest Racing entered two cars to compete against Peugeot's two-car entry over the five race season. Peugeot led the championships early, winning the first three races prior to the 24 Hours of Le Mans. A new sub-wing was introduced at Spa. This maintains the same level of downforce but less drag.

At Le Mans, Audi won for their third consecutive time with the R10. The #2 car driven by Rinaldo Capello, Allan McNish and Tom Kristensen took the chequered flag on lap 381 ahead of the #7 Peugeot, with a margin of just over 4 minutes. The other two Audi entries finished fourth and sixth overall. Peugeot brought their seasoned 908 HDi FAP and qualified within the 3:18 range while Audi struggled to get under the 3:23 mark. In the race itself the Peugeot was still up to 3.5 seconds a lap faster but quick pit work by Audi and the superior performance by the R10 in the rain saw Audi winning Le Mans.

Returning to the Le Mans Series for the final two races of the year, Peugeot won once again at the Nürburgring and maintaining their lead in the championships. However, accidents for Peugeot and a win by the #1 Audi of Rinaldo Capello and Allan McNish at the Silverstone finale allowed the Audi team to win the Constructors Championship, while the #2 Audi of Mike Rockenfeller and Alexandre Prémat earned the Drivers and Teams Championships.

Audi also continued their participation in the American Le Mans Series. As in the year before, Audi fought against the Penske Racing Porsches for overall race wins, but unlike before they now had to contend with the multiple Acura teams. Porsche managed to end Audi's streak of seven straight victories at the 12 Hours of Sebring, but Audi rebounded with overall wins in the next two events. Three more overall victories were earned by Audi by time the series reached the Detroit Sports Car Challenge. Audi not only failed to win the race overall, but following a rule infraction, neither car finished in the LMP1 category. This was the first time that the Audi R10 failed to win in LMP1, and the first LMP1 loss by Audi since 2005. At Petit Le Mans, Allan McNish overtook Christian Klien in the Peugeot on the penultimate lap and held on to the win. 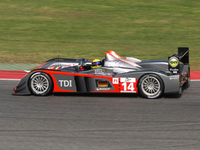 In the 2009 season, the R10 TDI was replaced by the R15 TDI with a smaller, lighter, more-efficient TDI engine; however, Audi concentrated on the 24 Hours of Le Mans and Deutsche Tourenwagen Masters (DTM; German Touring Car Masters) efforts. The new car, however, ran in the 2009 12 Hours of Sebring before preparing for Le Mans. The Audi R10's wing was limited by the 2009 regulations. In early 2009, Colin Kolles announced that his team will run privately entered Audi R10 TDI's in that year's 24 Hours of Le Mans, and possibly the Le Mans Series. The deal included factory assistance for servicing the cars.[14] At Le Mans, the Audi R10 best finished 7th overall, a few laps down on the highest petrol finisher Lola-Aston Martin which ranked 4th overall.

Kolles fielded 2 Audi R10 in their final year at the Le Mans 24 Hours, on 14 June 2010. Unlike the factory Audi and Peugeot LMP1, the Kolles R10 was not hampered by the new restrictor regulations which should have shaved off 60 bhp from the diesel-powered prototypes. The cars qualified 3:30, just behind the two Lola Astons. Both cars failed to finish because too much strain from torque was put onto the gearbox.