Skip to content
"Audi e-tron" redirects here. For the car model introduced in 2018 under the brand name until 2024, see Audi Q8 e-tron.
Series of electric and hybrid cars

The Audi e-tron is a series of electric and hybrid cars shown by Audi from 2009 onwards. In 2012 Audi unveiled a plug-in hybrid version, the A3 Sportback e-tron, released to retail customers in Europe in August 2014, and slated for the U.S. in 2015.[1] A decade after the unveiling of the first e-tron concept at the 2009 International Motor Show Germany, Audi's first fully electric e-tron SUV went into production in 2019.[2]

The name has also been used on some racing cars.

Audi e-tron is based on the MLB platform.

An SUV formerly called the 'e-tron' with 328 kilometres (204 miles) EPA range and a 95 kWh battery started production in 2018[3][4] and was first delivered in 2019, with Norway being among the first markets.[5] The vehicle is sold (delivered) in multiple countries, including the US, Canada and multiple countries in Europe. At the end of September 2019, there were more than 10,000 e-trons registered worldwide.[6][7][8]

Audi announced that the facelifted e-tron will be renamed to Audi Q8 e-tron which will be revealed at 9 November 2022. [9]

Audi Q2L e-tron is based on the MQB platform.

The Q2L e-tron is an all-electric version of the long-wheelbase variant of the subcompact SUV Audi Q2, which went into production at the Foshan plant in November 2019 and is sold exclusively in China. Powered by a 38 kWh lithium-ion battery of Chinese supplier Contemporary Amperex Technology, the Q2L e-tron has a range of 265 kilometres (165 mi) on one charge and a top speed of 150 km/h (93 mph). Its electric motor delivers the maximum power of 100 kW (134 hp) and maximum torque of 290 N⋅m (214 lbf⋅ft).[10]

Audi e-tron Sportback is based on the MLB platform.

The e-tron Sportback is an all-electric coupé SUV shown first as a concept at the 2017 Shanghai Motor Show. It has the same powertrain/battery as the e-tron SUV. Both cars are produced in Brussels, Belgium.[11] As in the e-tron SUV, the battery of the vehicle is liquid-cooled.[12]

The production version was revealed at the 2019 Los Angeles Auto Show. European and American deliveries started in 2020.[13][14]

The 2020 e-tron Sportback has an EPA range of 218 miles (351 km).[15] It is better than in the 2019 e-tron SUV, partially because a larger percentage of the battery capacity is usable. The e-tron's battery management system keeps part of the battery capacity as a buffer, which is not part of the usable capacity; now the size of that buffer was decreased to unlock more usable capacity. This change was introduced in the e-tron SUV during the production run, while in the e-tron Sportback, which entered production later, it was available from the beginning.

Audi has announced that the facelifted e-tron will be renamed to Audi Q8 e-tron which will be revealed at 9 November 2022. [16]

The e-tron GT is a four-door all-electric grand tourer. The concept model was showcased at the 2018 Los Angeles Auto Show. It is built on the same platform as the Porsche Taycan.[17] It is fitted with an 800-volt system, which substantially reduces charging times. The vehicle is driven by two permanently excited synchronous electric motors with a combined power output of 434 kW (582 hp). A 90-kWh lithium-ion battery powers the e-tron GT's electric engines and enables it to travel up to 248.5 mi (400 km) according to the new WLTP standard.[18]

The e-tron GT concept made an appearance in the 2019 film Avengers: Endgame, in which Tony Stark drives the e-tron GT in one scene in the film.[19] Production model is announced for 9 February 2021.

Audi Q4 e-tron is based on the MEB platform.

The Q4 e-tron is a battery electric crossover SUV unveiled at the 2019 Geneva Motor Show as a concept model. According to the Audi, the use of VW's MEB platform should improve its affordability. The production model is released in April 2021.[20]

Audi Q4 Sportback e-tron is based on the MEB platform.

The Q5 e-tron is a battery electric crossover SUV unveiled at the 2021 Guangzhou Auto Show. It is based on the MEB platform similar to the Q4 e-tron. Produced and marketed exclusively for the Chinese market, it is the first three-row SUV of the e-tron series.

Audi have announced to launch 12 fully electric e-tron models by 2025.[23] Audi considers a sell price level of €100/kWh as suitable for higher-priced cars, but not for cheaper cars made in high volume.[24]

After developing 10 prototypes for research and development purposes, in May 2013 Audi decided to cancel production of the electric car due to its limited all-electric range as battery technology had not advanced as quickly as Audi had expected, making the R8 e-tron unviable for series production.[34] In March 2014 Audi revised its decision and announced it will build the R8 e-tron upon request. The carmaker explained that their latest development work resulted in an increased range from 215 km (134 mi) to approximately 450 km (280 mi).[35]

The vehicle was unveiled in the 2010 North American International Auto Show in Detroit.[37]

A similar production model, based on a future mid-engined automotive platform codenamed 9X1, shared with Porsche and Volkswagen, is reportedly under development.[38]

Shown at the 2010 Paris Motor Show, this roadster is a plug-in hybrid powered by a 221 kW (296 bhp) twin-turbo TDI 3.0 L V6 diesel engine driving the rear wheels, plus two electric motors together producing 64 kW (86 bhp) powering the front wheels. Acceleration to 100 km/h (62 mph) is achieved in 4.4 seconds,[40] and it could theoretically travel 30 miles on electric power at the equivalent of 107 mpg. Audi also claimed the car had a range of 620 miles on combined diesel and electric power.

Audi presented the e-tron Spyder in January 2011 at the Las Vegas Consumer Electronics Show, near identical to the Paris show car, but this time painted bright red. The car was advertised with the same performance specifications, including an electronically limited top speed of 155 mph (249 km/h).[41]

The Audi A3 e-tron is an all-electric car variant of the Audi A3 production model. The A3 e-tron is powered by an electric motor under the hood which sends power from the rear- and mid-mounted battery packs to the front wheels. The 26.5 kWh lithium-ion battery pack provides an optimal range of around 92 mi (148 km), but between 70 to 75 mi (113 to 121 km) in real driving conditions. Top speed is limited to 89 mph (143 km/h).[42]

Audi deployed a fleet of 17 all-electric A3 by mid-2012 as part of a testing program in the U.S. The testing is conducted among Audi's engineers and company employees, and the company has no plans to test the vehicles with customers.[42][43] 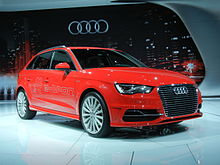 Retail sales were scheduled to begin in the U.S. in early 2015.[1] In an April 2015 video, Audi America president Scott Keogh said the 'price point is going to be around $40,000,' but made no indication if that was before or after tax incentives.[55]

Audi discontinued the A3 PHEV Sportback e-tron in Europe in November 2018.[56] However, the model was briefly re-introduced at the end of 2019 for MY20, now called A3 Sportback 40 e-tron under Audi's new naming scheme. The revised A3 e-tron in the UK featured a different level of specification, losing the previously standard LED headlights but gaining Audi's virtual cockpit as standard. The revised model featured the same battery and drivetrain as before, now rated at 22 miles of electric range under the new WLTP test.[57][58]

The production version of the Audi R8 e-tron was introduced at the 2015 Geneva Motor Show.[59] The limited production electric sports car was available only in Europe. Fewer than 100 units were sold at the end of production run.[60]

The A6 e-tron was introduced at the April 2021 Auto Shanghai. It is expected to be built on the PPE platform co-developed with Porsche.[61][62]

Audi used the e-tron quattro name on some versions of its Audi R18 racing car competing in the Le Mans Prototype class.

It is an off-road race car, originally built to complete in 2022 Dakar Rally.