The land on which the circuit is located was originally bought in 1926 by property developers who wanted to build housing.[1] Following difficulties partly due to the 1929 stock market crash, it was decided to build a racing circuit instead, construction started in 1938 and the track was inaugurated on 12 May 1940.[1] The design was inspired by the tracks of Indianapolis Motor Speedway and Roosevelt Raceway (1937 layout) in the United States, Brooklands in England, and Montlhéry in France.[2][3]

The traditional name of the circuit (literally, "between lakes") comes from its location on the neighborhood of Interlagos, a region between two large artificial lakes, Guarapiranga and Billings, which were built in the early 20th century to supply the city with water and electric power. The name of this region was suggested by the French architect and urban planner Alfred Agache after the Interlaken region located in Switzerland.[3] It was renamed in 1985 from "Autódromo de Interlagos" to its current name to honor the Brazilian Formula One driver José Carlos Pace, who died in a plane crash in 1977.[3]

Due to safety concerns with the 7.960 km (4.946 mi) circuit, including the bumpy track surface and the inadequate barriers, deep ditches, and embankments, the last Formula One race held on the original Interlagos was in 1980, the race was nearly cancelled after protests by many Formula One drivers including defending world champion Jody Scheckter. The safety concerns were directed towards the track surface, which BBC commentator Murray Walker described as "appallingly bumpy". Most of the ground-effect cars of 1980 were designed in such a way that bumpy surfaces were barely tolerable for the drivers. These factors meant that Formula One would move back to the Jacarepaguá circuit in Rio de Janeiro, hometown of established star Nelson Piquet and where the Brazilian Grand Prix was held in 1978. After Formula One moved away, the only major race being held at Interlagos was the Mil Milhas Brasil, and the last major race on the original circuit was the 1989 Mil Milhas Brasil. Formula One returned to the circuit in 1990 after it had been shortened and modified at a cost of $15 million. The track layout, aside from the pit exit being extended along the "Curva do Sol" over the years has remained the same since 1990. The ascendancy of another São Paulo local, Ayrton Senna, has also influenced the return of Formula One to Interlagos, and it has stayed there ever since. 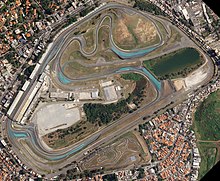 One the main characteristics of Interlagos is that it was not built on flat terrain, but follows the ups and downs of hilly ground, which makes it harder to drive and demands more power from the cars' engines. The races therefore can be tough on the car and physically demanding on the drivers, especially since the circuit runs counterclockwise, where the centrifugal forces in the many hard left turns push the drivers' necks to the right, instead of left as in most of the circuits on the F1 calendar. The hilly course is also a good feature for road cycling races, which are usually held at the circuit.

Additionally to the physical aspects there is also a climate component to the venue, the region where the track is located is known for having rapid changes in weather with outbursts of rain being common, which can vary from a short lived drizzle to a torrential storm. This can add a degree of unpredictability to the races and it's classic associated with the circuit. The city of São Paulo itself where Interlagos is located is known by the nickname "Land of the Drizzle".

In 1979 upgrading work was done and the pit lane was extended past the first left-hand turn (1), making the corner more narrow, and the pit lane ended right in the middle of turn 1 and 2. The present design of the track dates back to 1990, when the original circuit was shortened from 7.87385 km (4.89258 mi) to 4.325 km (2.687 mi). As a consequence of the reduction, the track lost three long straight sections and nine fast curves (5 were lost forever, 4 were made slower and are still present). The original track was full of fast corners and it allowed cars to keep maximum speed for up for many seconds, it was considered dangerous, and in 1990 the old layout was mostly revised. The new track still had a very long top-speed section that contained bumps, high-speed turns and little run-off area though the track was very wide at this point. 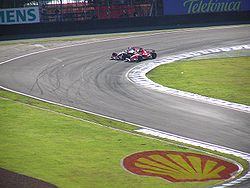