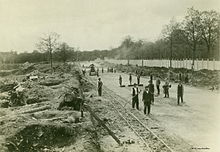 In 1929, Hellé Nice drove an Oméga-Six to victory in the all-female Grand Prix of the third Journée Feminine at the Autodrome de Linas-Montlhéry.[2]

The Bol d'or, the well-known French motorcycle endurance race of 24 hours, was held in Linas-Montlhéry before the Second War from 1937 to 1939, and after the Second War in 1949, in 1950, from 1952 to 1960, in 1969 and in 1970. British motorcycles were victorious usually from 1931 to 1959, (Velocette, Norton or Triumph); American Harley-Davidson, French Motobécane, German BMW, Italian Moto Guzzi, Austrian Puch and Czechoslovakian Jawa won only once. A legendary French racer, Gustave Lefèvre (Norton Manx) is always the record holder with 7 victories despite riding alone during 24 hours : his average speed was 107 kilometres per hour (66 mph) in 1953. The year after, two riders were allowed. In 1969, a Japanese bike, Honda Four, wins for the first time. In 1970, a British one, Triumph Trident, wins for the last time.[3]

The official race lap records at Autodrome de Linas-Montlhéry are listed as: