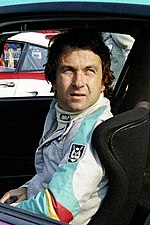 Bob Wollek[1] (4 November 1943 – 16 March 2001), nicknamed "Brilliant Bob", was a race car driver from Strasbourg, France. He was killed on 16 March 2001 at age 57 in a road accident in Florida while riding a bicycle back to his accommodation after the day's practice sessions for the following day's race, the 12 Hours of Sebring. He won a total of 76 races in his career, 71 in Porsche cars.

Prior to his racing days as a university student, Wollek was also a member of the French National Skiing Team between 1966 and 1968 competing in the Winter Universiade, he won three gold and two silver medals altogether (see table on the right)[2]

His skiing career came to an end when he was injured during preparations for the Winter Olympics.[3]

Prior to a skiing accident which ended his skiing career, Wollek began racing cars when he entered the Mont-Blanc Rally in 1967 driving a Renault 8 Gordini and won. The following year, when his skiing career ended, he started his racing career when he entered a Volant Shell scholarship race taking place at the Le Mans' Bugatti Circuit, finishing runner-up to François Migault. Wollek later entered the Alpine Trophy Le Mans which he won, earning himself a place for the 1968 24 Hours of Le Mans where he finished 11th overall and 2nd in class on his debut driving an Alpine A210.[3]

In 1969, Wollek made his debut in single seater racing competing in Formula France before graduating to the French Formula Three Championship.

During a round at Rouen-Les-Essarts, Wollek was involved in a fatal accident which killed Jean-Luc Salomon,[4] when the pair plus Jean-Pierre Jaussaud, Richard Scott and Mike Beuttler were all fighting for the lead at Scierie, where the track is a two-lane road.

In 1971, Wollek switched to Formula Two driving for Ron Dennis's Rondel Racing.[3][5] Despite a shaky start with only one point that year,[6] he improved his performance for the following year with a single win at Imola and 21 points, placing him seventh.[7] Despite this success, he abandoned his Formula One ambition to concentrate on sportscar racing where he would become one of the most recognizable names in the sport.

Wollek never won the 24 Hours of Le Mans overall, despite coming close in a few of his thirty attempts. In 1997, his leading factory-entered Porsche 911 GT1 suffered damage in a minor incident, so the car had to be retired. In 1998, Porsche scored a 1–2 win, but Bob was once again on the less-lucky runner-up car.

After the 1998 season, Porsche retired its GT1 cars from the Mercedes-dominated FIA GT Championship, providing only Porsche 911 based cars for the lower GT classes. In 2000, Wollek scored many class wins in the American Le Mans Series (ALMS) in a Porsche 996 GT3. The last race Wollek entered was the 2001 12 Hours of Sebring in a Porsche 996 GT3-RS. Wollek had already won there in 1985 with A. J. Foyt, driving a Porsche 962. Despite being over 50 years of age and still racing competitively, Wollek had developed a fitness regime of riding bicycles to stay in good physical condition, especially for the longer races such as the 24 Hours of Le Mans, to which he rode from home across France.

Typical of many other racing drivers, Bob ran a car dealership for Jaguar.[8]

On Friday 16 March 2001, while leaving Sebring International Raceway following practice for the 12 Hours of Sebring, Wollek continued a tradition of cycling between the circuit and his accommodation, which took him west on Highway 98. While he had been riding close to the edge of the pavement, he was struck from behind by a van driven by an elderly driver from Okeechobee, Florida at approximately 4:30 p.m.[9][10] He was transported to Highlands Regional Medical Center in Sebring and was pronounced dead on arrival. Wollek was due to start in the Petersen Motorsports Porsche 996 GT3-RS with Johnny Mowlem and Michael Petersen,[10] however out of respect the car was withdrawn from the race.[11] On race day, the organizers held a one-minute silence in memory of Wollek. Prior to his death, he announced he would retire from racing to serve as an ambassador for Porsche, and was due to sign this agreement upon returning home after Sebring.